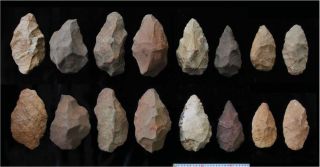 Scientists have unearthed more than 350 ancient tools in Konso, Ethiopia that were used by humans' ancient ancestors. The tools, which span roughly 1 million years of evolution, show a gradual progression to more refined shaping.
(Image: © PNAS)

Scientists have unearthed and dated some of the oldest stone hand axes on Earth. The ancient tools, unearthed in Ethiopia in the last two decades, date to 1.75 million years ago.

The tools roughly coincided with the emergence of an ancient human ancestor called Homo erectus, and fossilized H. erectus remains were also found at the same site, said study author Yonas Beyene, an archaeologist at the Association for Research and Conservation of Culture in Ethiopia. Collectively, the finding suggests an ancient tool-making technique may have arisen with the evolution of the new species.

"This discovery shows that the technology began with the appearance of Homo erectus," Beyene told LiveScience. "We think it might be related to the change of species."

The findings were described today (Jan. 28) in the journal Proceedings of the National Academy of Sciences,

Human ancestors used primitive tools as far back as 2.6 million years ago, when Homo habilis roamed the Earth. But those tools, called Oldowan tools, weren't much more than rock flakes knapped in a slapdash manner to have a sharp edge.

But nearly a million years later, more sophisticated two-sided hand axes or cleavers emerged. These Aucheulean tools could be up to 7.8 inches (20 centimeters) long and were probably used to butcher meat. Scientists recently discovered tools of this type a few hundred miles away near Lake Turkana in Kenya, dating to 1.76 million years ago. [Image Gallery: New Human Ancestors from Kenya]

Because of its coincidence with the appearance of Homo erectus, scientists believed the sophisticated tools were made by the newer species of Homo, but proving that was tricky, because the dating of fossils and tools wasn't precise enough, said study co-author Paul Renne, a geochronologist and director of the Berkeley Geochronology Center in Berkeley, Calif.

Beyene, Renne and their colleagues, however, have found Aucheulean tools that are indistinguishable in age from those found in Kenya, suggesting the symmetric hand axes were widespread in the region by that time. And the Konso, Ethiopia, site also harbors Homo erectus fossils, increasing the likelihood that this species was responsible for making the new tools.

What's more, they have unearthed more than 350 of these two-faced stone tools in Konso, in different geologic layers that span about a million years of human evolution. The tool-making techniques stayed similar until 800,000 years ago, when the edges on the tools became more refined, the researchers found.

That the timing of this tool-making emerges at the same time as Homo erectus is intriguing, and allows for the possibility that the tools were made by this ancient lineage, said Leah Morgan, a geochronologist at the University of Glasgow, who was not involved in the study.

But while the new study is suggestive that Homo erectus made these tools, it's not a smoking gun.

"It's tempting to say, 'Well, Homo erectus was making these tools at Konso,' and that's very difficult to prove," Morgan said.