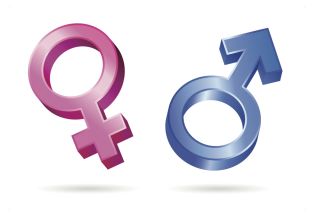 Men and women differ in some surprising ways, right down to their genes, according to a new study that found thousands of genes expressed differently in the two sexes.

For the study, the researchers examined genes in 53 body tissues — such as those from the heart, skin, muscle, fat and reproductive organs — that came from 550 people. Then, the researchers looked at each gene's level of expression, or the extent to which it was is "turned on" or "turned off."

Results showed that more than 6,500 genes were expressed at different levels in men than in women in at least one type of tissue, out of the approximately 20,000 total human genes.

The study also found that genes for certain liver enzymes were expressed more highly in women. One of the functions of the liver is to detoxify substances, and the researchers said that these genes may play a role in the differing responses to drugs seen in women compared to men, the researchers said.

Some of the findings could shed new light on the underlying physiology of certain diseases, the researchers said. For example, one gene, called NPPB, was found to be highly expressed in younger women, but the expression decreased with age. This gene may play a role in the increased risk of heart disease seen in women after menopause, the researchers said.

Another gene was expressed much more highly in women's brains than in men's. Although the function of this gene isn't known, the researchers speculated that it may play a role in protecting women from Parkinson's disease, which is known to be more common in men than in women, the investigators said.

"The basic genome is nearly the same in all of us, but it is utilized differently across the body and among individuals," study co-author Moran Gershoni, of the Department of Molecular Genetics at the Weizmann Institute of Science in Israel, said in a statement. "Our results can facilitate the understanding of diverse biological characteristics in the context of sex," the researchers said.

Interestingly, the study found that genes that showed sex bias in their expression also tended to accumulate genetic mutations at a higher rate than other genes. The researchers said they suspect that these gene mutations persist in the population because they affect only one sex. For example, genes that are harmful to men's reproduction remain in the population because they can still be passed on by women, since those genes aren't harmful to women's reproduction.

"Paradoxically, sex-linked genes are those in which harmful mutations are more likely to be passed down, including those that impair fertility," said study co-author Shmuel Pietrokovski, also of the Weizmann Institute. This could explain why infertility occurs fairly commonly in couples; about 15 percent of couples trying to conceive are defined as infertile, the researchers said.

The study was published online Feb. 7 in the journal BMC Biology.