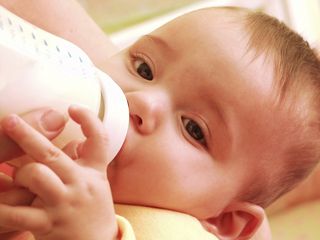 Unlike female nipples, male nipples appear to be purely decorative. But can they also be functional and secrete milk — that is, can men lactate?

To start, male lactation has been observed in a few domesticated animals, including cats, goats and guinea pigs, on rare occasions. However, male lactation seems to be common only in dayak fruit bats, though it's not yet clear why males of this species have the biology to spontaneously produce milk.

For both women and men, breast tissue contains hollow cavities called alveoli, which are lined with milk-secreting cells. But the critical determinant of lactation is prolactin, a hormone that's produced by the pituitary gland and stimulates the mammary glands to produce milk. [11 Surprising Facts About the Endocrine System]

Normally, non-pregnant women can have almost double the amount of prolactin circulating in their body than men, according to the National Institutes of Health. This concentration can spike by nearly tenfold during and after pregnancy.

Research has shown that male prolactin levels can also surge, according to a 2008 review on male lactation published in the journal Trends in Ecology and Evolution.

Similarly, a condition called liver cirrhosis can cause lactation by disrupting the organ's normal, hormone-metabolizing function.

Health issues that affect the pituitary gland or the hypothalamus, which normally inhibits the release of prolactin, can also cause male milk production.

For example, a 2010 study published in the Canadian Medical Association Journal documented lactation in a man with a pituitary tumor.