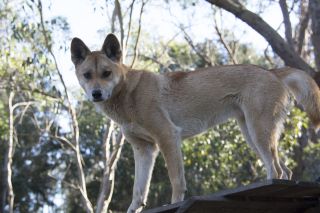 Sandy Maliki, a pure desert dingo and winner of the World's Most Interesting Genome competition, will have her DNA decoded.
(Image: © Barry Eggleton/Pure Dingo)

Meet Sandy the dingo, owner of the world's most interesting genome.

The wild-born, pure Australian desert dingo recently took first place in the World's Most Interesting Genome competition, and will have her DNA decoded thanks to the Pacific Biosciences SMRT Grant Program. The grant provides genome sequencing for "a particularly fascinating plant or animal."

In a public poll, Sandy secured 41 percent of the votes to beat out a pit viper, a solar-powered sea slug, an explosive beetle and a pink pigeon for the top prize.

Sandy's DNA could offer researchers insight into the process of domestication, according to project leader Bill Ballard, an evolutionary biologist at the University of New South Wales (UNSW). [10 Things You Didn't Know About Dogs]

"Sandy is truly a gift to science. As a rare, wild-born pure dingo, she provides a unique case study," Ballard, who submitted the bid to sequence Sandy's DNA, said in a statement. "Pure dingoes are intermediate between wild wolves and domestic dogs, with a range of non-domesticated traits. So sequencing Sandy's genome will help pinpoint some of the genes for temperament and behavior that underlie the transition from wild animals to perfect pets."

Dingoes were not domesticated by indigenous peoples after being introduced to Australia about 5,000 years ago, according to the UNSW researchers. However, interbreeding with wild and domestic dogs has made pure wild dingoes a rare find.

At 3 weeks old, Sandy, her sister and her brother were discovered in poor health in the Australian desert, and their parents could not be found. The wild pups were taken in by local animal lovers Barry and Lyn Eggleton, who have hand-reared the dingoes since their rescue in 2014.

The sequencing of Sandy's pure-dingo DNA will test of Charles Darwin's 1868 theory on the process of domestication. Darwin theorized that domestication could occur via unconscious selection (a result of nonintentional human influence) and artificial selection (breeding for specific traits).

"This project will reveal the DNA changes between wolves and dingoes (unconscious selection) and dingoes and dogs (artificial selection)," Ballard said in the statement.

Beyond its evolutionary value, sequencing Sandy's genome will give researchers a better understanding of dingo genetics, Ballard said. This could aid conservation efforts to protect the wild canines and improve tests for their genetic purity, he added.