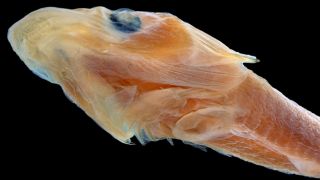 This new species of clingfish (Nettorhamphos radula) was found in a museum specimen jar from the 1970s.
(Image: © Kevin Conway and Glenn Moore)

What has at least 1,800 teeth, a snout like a duck, a suction cup on its belly, and has only ever been seen in a couple of old museum specimen jars?

Nettorhamphos radula is a brand-new species found in a specimen jar from the 1970s in the collection of the Western Australian Museum in Welshpool, Australia. The teensy translucent fish is just a few inches long, but it sports between 1,800 and 2,300 teeth in its duckbill-like mouth. [See Photos of the Freakiest-Looking Fish]

"It's the teeth that really gave away the fact that this is a new species," fish taxonomist Kevin Conway, one of the discoverers of the new fish and a professor at Texas A&M University, said in a statement.

Clingfish are known for the suction-cup-like disk on their bellies, an appendage that lets them stick to surfaces in the face of forces of up to 150 times their own body weight. (Part of the secret are tiny hairs, or microvilli, that create high friction and ensure that even dead fish can cling.)

Conway and Glenn Moore of the Western Australian Museum found the new fish while sorting through specimen jars, examining animals that had been collected and shelved until someone had a chance to look at them. The new clingfish waited a long time: It had been caught in 1977 off the coast of Southern Australia.

No one has ever seen N. radula in the wild, but Conway and Moore quickly found a second specimen hiding in the same museum. They used computerized tomography (CT) scanning to peer inside the fish, as a doctor would peer inside a wrenched knee. Using the scans, the researchers 3D-printed large models of the fish jaws for closer analysis.

What the team found, and reported April 14 in the journal Copeia, was not an average clingfish. It has about 10 times as many teeth as other clingfish, all of which are cone-shaped and point inward, toward the fish's throat. This may suggest that the teeth are used for gripping. The wide upper jaw was also a sign that this fish deserved not only its own species but a new genus, the taxonomical category that encompasses multiple species.

"It's pretty special given this fauna is already pretty well-studied," Conway said.

Clingfish are found in tropical and temperate waters worldwide. Most live in shallow reef or seagrass habitats, according to Fishes of Australia, a reference work hosted online by Museums Victoria. Some members of the clingfish, or Gobiesocidae, family excrete toxic mucus from their skin. A 1979 study of Diademichthys lineatus from Japan found that a solution of water and mucus killed fellow fish in less than an hour and a half.