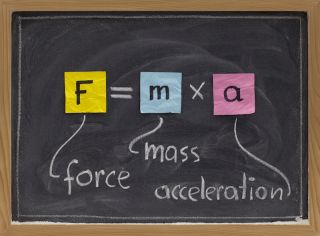 Scientists have created a new superfluid that has a negative mass, meaning that if it's pushed to the right, it accelerates to the left and vice versa.

The bizarre behavior may sound like a freakish violation of nature, but it is a phenomenon that physicists have seen hints of before. However, this is the first time that negative mass has been demonstrated without ambiguity in a lab, said Han Pu, a theoretical physicist at Rice University who was not involved in the new research.

The newly created material with negative mass is a type of Bose-Einstein condensate, in which individual atoms move as one object, the scientists wrote in the new study. [The 18 Biggest Unsolved Mysteries in Physics]

The new findings could hold clues to the behavior occurring in the heart of ultracold neutron stars, which also act as superfluids, said study co-author Michael Forbes, a physicist at Washington State University.

One of the first things that students learn in high school physics is that force is equal to mass times acceleration, or F= m*a. Called Newton's second law of motion, the equation dictates what everyone experiences daily: If you push an object (barring other forces at play), it accelerates away from you.

Yet, for a long time, scientists have known that — theoretically, at least — there are certain conditions in which acceleration could be negative.

"These types of negative-mass conditions can arise in a variety of contexts," Forbes told Live Science. "They don't occur out in the middle of space, as far as we know."

However, there have been hints of this behavior occurring spontaneously in systems where light is traveling through nonlinear materials with special electrical properties, as well as in certain types of crystals. However, in these systems, it was hard to control or predict where the negative mass occurred, so it was difficult to say whether the behavior was actually occurring, Forbes said.

In the new study, which was published April 10 in the journal Physical Review Letters, Forbes and his colleagues eliminated this uncertainty. They cooled rubidium atoms to near absolute zero (minus 459.67 degrees Fahrenheit, or minus 273.15 degrees Celsius) while the atoms were squished inside a tiny horizontal tube. At these bone-chilling temperatures, the atoms move glacially slow, and their motion is correlated such that the material made up of the rubidium atoms acts more like a wave than a particle. In essence, it is as if the collection of supercool atoms behaves as one particle.

Then, the researchers shined lasers at the tube, which changed the state of the atoms inside. Based on the angle of the laser, it pushes the particles either one way or the other. Next, the researchers opened up the ends of the tube holding the atoms. Normally, the laser light would push the cloud of atoms to expand outward toward the ends of the tube. But in this instance, a shock wave built up on one side of the cloud, causing the cloud of atoms to contract away from the wave.

"If you try to push [the cloud of atoms] away, it's effectively the lasers that are causing it to push backward," Forbes said. "At a microscopic level, that's what's happening."

Though the new demonstration may seem to violate the laws of physics, it actually doesn't.

That's because the effective negative mass of the system here is inertial mass, which dictates how an object accelerates in response to an applied force; in this instance the study simply means that in certain narrow, dynamic conditions, the sign on the mass term in the equation is flipped. But energy is still conserved and the gravitational mass of the system, meaning the amount of gravitational pull the atom cloud exerts and experiences, has not changed. So Newton's law of universal gravitation, which describes the gravitational attraction between two masses, has not been violated. (This law is what dictates that, in a vacuum without air resistance, a feather and a lead ball will fall toward Earth at the same rate.)

Because the gravitational mass of the Bose-Einstein condensate is still positive,  the individual atoms in the material are still pulled together by gravity. So if the same experiment were flipped so it were in a vertical tube, the force of gravity could cause the atom cloud to fall toward the floor and expand, just as ordinary intuition would expect, Forbes added.

(If, somehow, an experiment created conditions in which gravitational mass turned negative, that would likely violate fundamental physics laws, and things would get weird — fast. For instance, if there were a negative gravitational mass particle and a positive mass particle in proximity, one would be attracted to the other, while the other would be repelled. So one particle would essentially chase the other one forever, reaching infinitely high speeds, Forbes said.)

The new findings are interesting from a purely theoretical point of view, but they could also help scientists understand what's going on inside neutron stars, Forbes said. For instance, cold clouds of lithium atoms filled with fermions have almost identical energetic properties to neutron stars, so they could be used to create "experiments" that otherwise never could have been done on the massive interstellar objects in space, Forbes said.