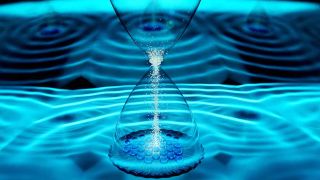 Scientists have recently succeeded in creating a mysterious state of matter known as a time crystal. This exotic state of matter seems to suspend the laws of thermodynamics indefinitely.
(Image: © E. Edwards/JQI)

The time crystal is essentially a collection of atoms or ions that are far apart but still interacting with each other. This form of matter keeps "ticking" indefinitely at a certain frequency, without heating up or creating entropy, the natural state of disorder that always increases in the universe. Time crystals work because of quantum effects, or the bizarre rules describing the menagerie of tiny subatomic particles.

The newly created matter joins a host of other exotic states of matter, such as superconductors, quantum-spin liquids and superfluids.

"We have found a new phase of matter," said study co-author Soonwon Choi, a theoretical physics graduate student at Harvard University. "It's something moving in time while still stable." [The 18 Biggest Unsolved Mysteries in Physics]

While the newfound state of matter is fascinating in itself, it could also pave the way for quantum computers that don't lose information, Choi said.

Physicist Frank Wilczek first proposed the idea of a time crystal in the journal Physical Review Letters in 2012. In that study, he suggested a form of matter that spontaneously breaks "time invariance," a fundamental symmetry in time. The concept of time invariance dictatesthat doing something now would produce the same result as doing the same thing, for example, 1 minute in the future (all other conditions being equal).

In Wilczek's conception, however, the quantum interactions among particles, such as ions or subatomic particles, could create a state of matter that oscillates repeatedly in time, just as a crystal has a structure that repeats in space. That means that if the matter oscillated with a period of 2 minutes, doing something with that matter now would produce different results than doing the same thing 1 minute from now. [Photos: Exotic Time Crystals Created in the Lab]

To understand what this means, imagine two people holding a jump rope and swinging it for a third person doing the jumping. In ordinary states of matter, if the rope makes a circle every second, the person must jump every second. But in a time crystal, it is as if the jumper lifts his or her feet every other time the rope hits the ground, and yet somehow keeps time and does not get entangled in the rope, said study co-author Norman Yao, a physicist at the University of California, Berkeley, who earlier this year developed a theoretical framework for testing time crystals.

Earlier this year, Yao, with Andrew Potter, a physicist at the University of Texas at Austin, and colleagues, developed a theoretical paper that identified key signatures of a time crystal. That paper predicted what would happen when a such a crystal melts into a more humdrum state of matter, and laid out an experimental way to prove the existence of time crystals. Independently, Choi and colleagues developed their own idea for a method of demonstrating the existence of time crystals, and then set out to create such a crystal in the lab.

In a pair of studies published today (March 8) in the journal Nature, the researchers showed that time crystals can exist in very different systems.

Choi and his colleagues based at Harvard University used a diamond filled with 1 million nitrogen vacancy color centers; these are spots in the diamond's carbon crystal lattice where nitrogen atoms have replaced the carbon atoms. Because nitrogen is smaller than carbon, this replacement leaves an empty space in the lattice, and the nitrogen and the empty space can act together as if they are tiny particles with spins. (The vacancies are called color centers because the nitrogen atoms produce color in the diamonds ; in this instance, the diamonds are so full of these defects that they appear black.)

Using lasers and microwave radiation, the team then periodically pulsed these nitrogen vacancies, which then oscillated with a frequency that was half of the frequency of the radiation aimed at them (called the driving frequency).

In a second experiment based at the University of Maryland, Potter, Yao and colleagues trapped 14 ions of ytterbium using laser beams and then manipulated the ions' spins using tightly focused laser beams. Again, the material acted like a time crystal, oscillating at half the driving frequency. For the duration of the experiment, the material did not heat up, despite a lot of energy being pumped into the system, said Potter. That's a sign that the laws of thermodynamics didn't come into play during the duration of the experiment, he added.

For instance, the Harvard group used a system that may not be a perfect time crystal, Potter said. The system didn't heat up much, but it did slowly generate heat.

"They're looking a this charmed existence that will slowly die if they let it run long enough," Potter told Live Science.

By contrast, the University of Maryland experiment could conceivably persist indefinitely, though it used a much smaller number of atoms that stretches the definition of what constitutes a state of matter, Potter said.

But the new findings show that the time crystal does not need to be perfectly isolated from heat and entropy to exhibit its repeating-in-time properties, Yao said. This means it may be surprisingly easy to generate these exotic states of matter, he said.

The truly fascinating thing about these experiments is that they have the potential to suspend the laws of physics indefinitely, Potter said. Like a cup of hot coffee that never reaches room temperature, "extra energy just stays in place and the system never equilibrates to one temperature," Potter said.

However, it's important to note that these time crystals don't "break" the fundamental laws of thermodynamics per se; they just put them off as long as the experiment is running, Potter said.

"Thermodynamics is only ever supposed to describe the long-term behavior once you reach this thermal steady state, so it never describes short-term dynamics before you reach thermal equilibrium," Potter said.

By keeping the system in a dynamic state, then, the new experiments simply hold the matter in a regime in which thermodynamics ordinarily wouldn't apply, he added.

Editor's Note: This article was updated to note that follow-up work showing time crystals could not exist in thermal equilibrium was based on Frank Wilczek's idea, not that of Norman Yao.