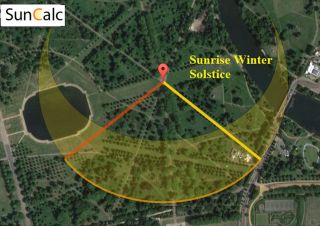 Another alignment in the gardens occurs between a pathway and the rising sun during the winter solstice, the shortest day of the year.
(Image: © Courtesy of Amelia Carolina Sparavigna)

The pathways of the "Peter Pan" gardens in front of Kensington Palace in London were designed to align with the rising sun during the summer and winter solstices, a researcher had found.

Amelia Carolina Sparavigna, a physics professor at the Politecnico di Torino in Italy, discovered the alignments using a combination of satellite imagery and astronomical software.

British monarchs have used Kensington Palace as a residence since 1689; today, it's home to Prince William, his wife, Catherine Middleton, and their children, as well as Prince Harry and several other members of the royal family. [In Photos: Peru Pyramid Shows Solstice Alignment]

The gardens in front of the palace, which encompass 265 acres (107 hectares) of land, gained literary fame in the early 20th century when author J.M. Barrie used the palace gardens in his short story "Peter Pan in Kensington Gardens," published as part of the book '"The Little White Bird" (Hodder & Stoughton, 1902). In the short story, Kensington Gardens is the home of Peter Pan, the boy who never grows up. In later tales, Peter Pan escapes to a place called Neverland. A statue of Peter Pan was erected in the gardens in 1912.

Kensington gardens contains a sizable pond called the Round Pond, which has a circular pathway around it. This circular pathway connects to several other paths that lead to other areas of the gardens.

Can we observe the alignments?

It's not certain if somebody, today, might be able to easily observe these alignments from the ground. Sparavigna said that her study of the satellite images and photographs of the gardens doesn't show any buildings that block the paths that align with the summer solstice; however, pictures show that trees on the path may make it difficult to observe.

Additionally, the gardens open at 6 a.m. local time, according to the official website for Kensington Palace. During the summer solstice, the sunrise occurs before that time. It's also not clear if the path's alignment with the rising winter solstice sun could be observed from the ground.

Garden designer Charles Bridgeman is credited with designing the modern-day layout of the gardens, creating the current design in 1728, according to the Kensington Palace website. Sparavigna analyzed a drawing of the gardens from 1754 and found that the design of the gardens at that time is about the same as the design that exists today.

It's not known why some avenues in Kensington Gardens have these solstice alignments, but Sparavigna thinks that they were created intentionally, possibly for symbolic purposes. "The architects planned the gardens, including two references to the apparent path of the sun, through the sunrise on solstices," she wrote in her paper, which is published online on the Social Science Research Network (SSRN), a site that disseminates scholarly research before it is published in an academic journal.

Sparavigna has studied several other gardens for solar alignments over the past few years and, in 2015, published a paper detailing solstice alignments found in the gardens of the Taj Mahal. In 2016, she also found alignments in a garden located near the White House in Washington, D.C.

The growing availability of high-resolution satellite imagery, as well as the development of astronomical software that can rapidly perform analysis of this imagery, has made it much easier, and cheaper, to analyze gardens and archaeological sites for solar alignments, Sparavigna has told Live Science in previous interviews.