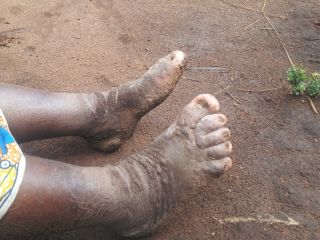 This image shows the typical symptoms of podoconiosis, including swollen, thickened lower limbs with a warty and mossy appearance. This is an advanced form of the disease.
(Image: © Dr. Christine Kihembo)

A rare condition called elephantiasis, which tends to strike people in tropical parts of the world, was long thought to occur due to a parasitic infection. But a new study shows that the condition can have another cause: sharp crystals found in certain soils.

In elephantiasis, a person's limbs become discolored and swollen with fluid. They may swell to enormous sizes, resembling the limbs of an elephant. The most common cause of the condition is a mosquito-borne parasitic infection called lymphatic filariasis, in which microscopic worms invade the body's lymph nodes and vessels, causing the swelling.

But in 2014 and 2015, there were reports of two intense outbreaks of elephantiasis in western Uganda, an area that is not known to harbor these worms. [The 10 Most Diabolical and Disgusting Parasites]

Indeed, when the Uganda Ministry of Health investigated the outbreak, the agency identified another cause of elephantiasis: a disease called podoconiosis. And what was thought to be an outbreak of a parasitic disease was far from it; rather, the symptoms of podoconiosis slowly build up over decades, gradually developing into elephantiasis, the study said.

"People can be suffering from podoconiosis, a noninfectious disease, for decades before it becomes obvious that they are developing elephantiasis," lead study author Dr. Christine Kihembo, a senior field epidemiologist at the Uganda Ministry of Health, said in a statement. "Many of the people affected in western Uganda probably had been suffering silently without help for more than 30 years."

In September 2015, Kihembo and her team visited the region to try to determine why people there were getting the disease. Their findings were published published Monday (April 10) in the American Journal of Tropical Medicine and Hygiene.

In the study, the researchers looked at 52 people who had hard, asymmetrical swelling of both legs that lasted for at least one month, along with other relevant symptoms, such as itching or burning in their legs,  rigid toes and skin with a "mossy" appearance, the researchers wrote in the study.

They ran blood tests and ruled out the usual case of this swelling, the parasitic infection called lymphatic filariasis. In 40 of the 52 people with symptoms, the parasite infection was not found. And so the researchers concluded that these 40 people probably had the other cause of the swelling, podoconiosis.

But what causes podoconiosis? To answer this question, the researchers looked to the soil.

Prolonged exposure to volcanic soil was thought to cause podoconiosis, the study said. When a person spends a lot of time walking barefoot on volcanic soil, mineral crystals penetrate the soles of his or her feet. These crystals make their way into the lymphatic system, and damage it. The lymphatic system, which includes the lymph nodes, is a network of tissues and organs that help rid the body of waste. When the system is damaged, a clear fluid called lymph, which contains white blood cells, can build up, causing the characteristic swelling of elephantiasis.

From interviews with the participants, the researchers learned that about half were farmers. Of these farmers, about two-thirds never wore shoes while farming and two-thirds never washed the soil off their feet during the day, the researchers found. In contrast, most of the people in the control group wore shoes while farming. However, not wearing shoes at home was also associated with developing the disease.

Farming while barefoot was strongly associated with developing the disease, the researchers wrote.

Indeed, the researchers recommended that in the future, the villagers be provided with shoes to help reduce their risk of developing the disabling disease.