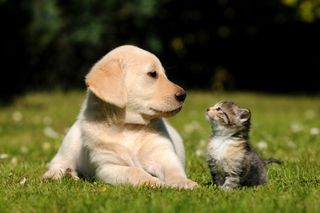 Cats and dogs, without fail, will always remember to ask for food.
(Image: © schubbel/Shutterstock)

Pet cats and dogs can remember the location of their food bowls and sometimes even how to perform tricks or find their way home. But just how good (or bad) are these fur balls at remembering the minutia of their days?

It depends on how useful those memories are to them, evolutionarily speaking, experts told Live Science.

Take free-roaming dogs, for example. About 75 percent of the world's dogs aren't pets and don't live in human homes, said Monique Udell, an assistant professor of animal and rangeland sciences at Oregon State University. A memory that helps dogs excel at scavenging can help them survive on the streets, Udell said. [20 Weird Dog and Cat Behaviors Explained by Science]

For instance, understanding basic displacement tasks — knowing that something is still there, even if it's not visible — can help scavengers, she said.

"If someone walks by a trash can and throws away a hamburger, you might not see it anymore, but [dogs] can remember that there was a hamburger, and they can look [for it] the last place they saw it," Udell said.

When food is involved, dogs can have excellent working memories — a sort of mental scratch pad where short-term memories linger. Furthermore, dogs use long-term memories to help them remember tricks, such as rolling over on command, Udell said. It's possible that over time, dogs that forged close bonds with humans (that is, responded to their voice commands) benefited and then lived to pass down their genes, Live Science reported previously.

Dogs may also have episodic memories. These are like long-term memories, but they are more complex because they require self-awareness. (It's unclear if dogs are self-aware, so for them, these memories are called "episodic-like" memories.) Episodic memories are usually autobiographical, and are tied to "what," "when" and "where" details, Udell said.

Some dogs displayed episodic-like memories in a 2016 study published in the journal Current Biology. Seventeen dogs were taught to imitate humans in a "do as I do" paradigm, and then lie down. For instance, if the human knocked over a bottle, so would the dog before lying down.

After one such task, after the dog lay down, the human completed an extra action, such as touching an umbrella, while giving an unfamiliar command. Then, the human took the dog behind a screen, and waited anywhere from 1 minute to 1 hour before asking the dog to "do it."

Some dogs were able to remember and perform the imitation at both time points, although most dogs' performances declined with time between seeing the action and being asked to do it, the researchers found. The finding suggests that dogs can encode memories unrelated to commands, and can then incorporate them with later orders, as long as the order is given within about an hour, the researchers said.

"Dogs can hold things in memory for a long time," Udell said. "But what they remember and how long they can remember it for has a lot to do with context." For instance, if owners leave for military service, dogs can remember them years later, suggesting that owner-dog bonds are important to them.

But if you ask them, "Where's the ball?" they might forget within a few minutes.

"It has to do with the context and also the salience and importance of the things that were coded," Udell said. [Are Cats Smarter Than Dogs?]

Cats, like dogs, excel at remembering details pertinent to their evolutionary history. For instance, cats appear to have good memories when it comes to hunting, said Mikel Delgado, a doctoral candidate of psychology at the University of California, Berkeley, who is also a certified cat behavior consultant.

In two experiments, nearly 50 cats were able to remember which bowls contained food, even after the felines were taken out of the room for about 15 minutes, according to a January study published in the journal Behavioural Processes. These results suggest that cats have short-term working memories that can encode details regarding "where" and "what" for short periods of time, at least when food is involved.

Another study, published in 2008 in the journal Applied Animal Behaviour Science, showed that cats are also good with spatial memory. In the study, the cats had to remember what cups they had already eaten from on a board containing many half-hidden cups. However, older cats made more mistakes than younger cats did, suggesting that feline memory declines with age, the researchers said.

This type of memory may help cats remember where to find prey, and whether they have already patrolled a particular haunt that night, said Delgado, who was not involved in the study.

Yet, cats' working memories can be surprisingly short-lived, especially when those memories don't involve food. In a 2006 study published in the journal Animal Cognition, 24 cats watched an experimenter hide an object in one of four boxes. The cats had to wait 0, 10, 30 or 60 seconds before they were allowed to find the object.

After 30 seconds, most cats started having trouble finding the hidden object. But this result isn't surprising, said Delgado, who wasn't involved with the study. If a cat is chasing a mouse in the wild, the mouse might hide behind something. The odds are low that the mouse will still be there a minute later.

"If it's out of sight, it's probably gone," Delgado said.

It's difficult to measure memory in cats and dogs — or any animal, for that matter.

"You're asking questions about what's going on inside of the animal's head in ways that we might not be able to see," Udell said. "So we're using their behavior to try to interpret what is going on internally."

But the more scientists find out about the memory of these animals, the better, because some researchers are starting to use dogs as models for human aging, dementia and Alzheimer's disease, Udell said.