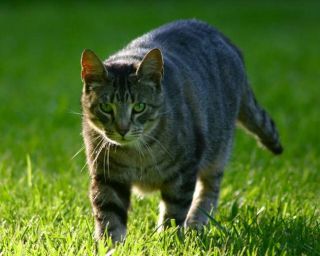 Cat in the grass.
(Image: © MorgeFile.com)

A new study has measured just how long cats can remember certain kinds of information—10 minutes.

The research was designed primarily to compare cats' working memory of their recent movements with their visual memories, and found that cats remember better with their bodies than their eyes when they have encountered an object placed in their path by say, an annoying owner or experimenter.

When a cat steps over a stray toy or shoe left on the floor on the way to its food dish, it has to coordinate the stepping action of its front legs with its hind legs.

"Animals, including humans, unconsciously keep track of the location of objects relative to the body as they move, and this tracking is largely dependent on signals associated with movement of the body," said researcher Keir Pearson of the University of Alberta in Canada.

Though researchers were aware of this association, they wondered exactly how kitty remembers to bring her hind legs up after her front legs have cleared an obstacle.

To test cats' coordination, the researchers looked at how well they could remember having just stepped over a hurdle. The researchers stopped cats after their front legs had cleared an obstacle, but before their hind legs went over.

They then distracted the animals with food and lowered the obstacle to see how the tabbies would respond. The cats remembered having stepped over the hurdle for at least 10 minutes, bringing their hind legs up to clear the object, even though it wasn't there.

To compare this working memory to the cats' visual memory of the obstacle, the researchers repeated the experiment, this time stopping the cats just before they made their first step over the hurdle.

Turns out the cats weren't so good at remembering what they had seen but not yet done: when the obstacle was removed this time, the cats forgot it had even been there in the first place and continued on their way.

"There's not high-stepping at all," Pearson told LiveScience.

"We've found that the long-lasting memory for guiding hind legs over an obstacle requires stepping of the forelegs over the obstacle," Pearson said. "The main surprise was how short lasting the visual memory on its own was—just a few seconds when animals were stopped before their forelegs stepped over the obstacle."

Similar memories may play a role in humans' ability to navigate objects in the dark or remember where they parked their car in the morning.

By actually walking from your car into your office, you solidify the memory of what space your car is in and don't spend half an hour looking for it—well, not usually.