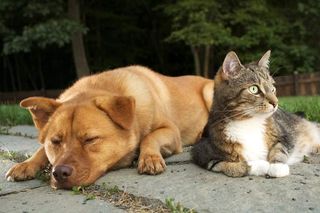 A lost Fido is more likely to be found than a missing Tabby.

Why? Because man’s best friend is more likely to have identification tags and dog owners are more prompt in searching for their missing pets, according to a new study.

The findings, published in the Jan. 15 issue of the Journal of the American Veterinary Medical Association, found that while 71 percent of lost dogs in the Dayton, Ohio, area were reunited with their owners, only 53 percent of lost cats ended up back at home.

“Dogs seem to be easier to get home to their owners,” study author Linda Lord of Ohio State University told LiveScience.

In her survey of people who ran lost pet ads in local newspapers, Lord found that dog owners contact and visit shelters much sooner than cat owners after the pet goes missing. More than one-third of the recovered dogs were found after a call or visit to a local animal shelter.

Cat owners may not put identification on their cats because the cat shirks the collar or they keep the cat indoors.

“Just because you keep your cat indoors doesn’t mean you don’t have to identify them,” Lord said. Cats still can slip out of the house.

When people find cats without identification, they might assume they are strays and feed and adopt them, whereas people who see a dog wandering alone are more likely to assume it has an owner, Lord said.

Many cat owners also wait several days before calling or visiting shelters. They run the chance of missing their cat, which could be euthanized or adopted by someone else.

Of the study cats that did make it back to their owners, Lord said, two-thirds came back on their own.

The key to finding a lost pet is visible identification, Lord said. If someone finds your pet, they can call the number on the ID tag without having to involve the shelter system. While microchips are a great backup, they are not visible to the naked eye and require shelters or veterinarians to scan them,  she said.

Lord also emphasized that it is important to act quickly when looking for a missing pet by calling local shelters after one day, visiting every three days, putting up posters and even taking out newspaper ads.

The pet owners Lord interviewed were often surprised to hear about methods they hadn’t tried.

“There was definitely a lack of awareness,” she said.

Though different methods may be more or less effective in different places, Lord said, “people really need to think about having a plan.”