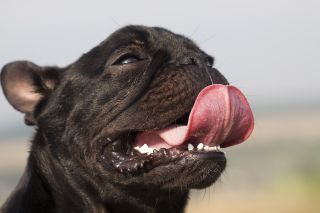 On a hot summer day or after strenuous exercise, most pups let their tongues hang out of their mouths as they huff and puff or they lie outstretched on the cool floor. It's not uncommon for dogs to pant after a long run, but do they also sweat?

Dogs pant as a means of evaporative cooling: when a dog gets hot, it will open its mouth and breathe heavily. As water evaporates from the dog's tongue, nasal passages and lungs, this helps lower its body temperature.

While dogs primarily use panting to cool themselves down, they also sweat — but not where you may think, said Catherine Carrier, a veterinarian and Animal Operations Senior Manager at Covance Laboratories, a contract research facility that partners with pharmaceutical companies. [The 10 Most Popular Dog Breeds]

Dogs actually sweat through their paws, Carrier said. In 2011, she was working with beagles in her lab, and while checking to ensure their nails were well trimmed, she noticed something peculiar in several of the dogs. Paw pads are a specialized type of skin that's heavily keratinized, to make them tough for walking on, but these dogs had paws that were damp — and in some cases, they were even dripping with sweat.

In several of the animals, this led to a great deal of pain because the skin was softer and more delicate than a normal paw pad."It's like having an open blister," Carrier told Live Science.

Carrier's research was the first to describe hyperhidrosis, or excessive sweating, in beagles.

But the sweat glands in the dogs' feet may also serve another purpose, according to Carrier.

"They do have true sweat glands in their paw pads, [but] that's not enough to cool them down," she said.

Panting cools a much greater surface area than a dog's paws would. According to Carrier, experts speculate that sweat on a dog's paw pads actually has more to do with traction than temperature. In other words, it makes their paws tackier and better at gripping the ground.

"The one thing I always tell people is a normal dog foot should smell like they just had their paws in a bag of corn chips, because they do sweat through their feet," Carrier said. "It has a salty smell."

Dogs also have sweat glands in their noses, but again, they're not necessarily for cooling purposes, Carrier said. While it remains unproved, Carrier said the thinking is that a damp nose better attracts scent molecules to the olfactory center. The canine sense of smell is famous, and its power has recently been harnessed to sniff out diabetes, cancer, and even dangerous infections like C. difficile. A 2012 research study conducted at the VU University Medical Centre in the Netherlands trained a beagle to sit or lie down when the scent of the bacterium was detected. The dog performed with impressive accuracy, correctly identifying 25 out of 30 infected samples and 265 out of 270 controls.

"In comparison studies, where they took fecal samples and did a side-by-side lab test, the trained dogs were nearly as accurate, if not better, than the test," Carrier said.