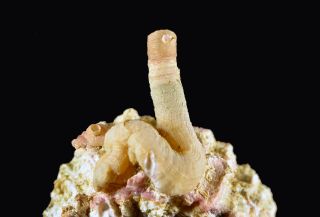 A newfound species of colorful marine snail slings nets of mucus like superhero web slinger Spider-Man and is "kind of cute," according to the scientist who found and described it.

The tiny sea creature belongs to a group known as worm snails — soft-bodied mollusks encased in tubular shells with an opening at one end. Their hatchlings crawl freely, but they soon attach their shells permanently to hard substrates — like corals or rocks — and are entirely stationary as adults.

Researchers found the new species attached to a shipwreck that had been designated as an artificial coral reef in the Florida Keys. Though the worm snails were fixed firmly in place, they likely originated far away and are not native to that part of the Atlantic Ocean, scientists wrote in a new study. [Alien Invaders: Destructive Invasive Species]

The newly described snail, Thylacodes vandyensis (thy-la-KOH'-dees van-dee-EN'-sis), was named after the ship where it was found: the USNS General Hoyt S. Vandenberg, aka "Vandy." A former World War II naval transport vessel, "Vandy" rests on the sea bottom of the Florida Keys National Marine Sanctuary. The ship, which measures 522 feet (159 meters) long, was deliberately scuttled on May 27, 2009, to become the world's second-biggest artificial coral reef, CNN reported that day.

T. vandyensis snails vary in size, but on average, they are "about the length of a finger," according to study lead author Rüdiger Bieler, a curator of zoology at The Field Museum in Chicago. Their shells measure up to 1 inch (25 millimeters) long and are tipped at one end by a narrow opening of about 0.2 inches (5.5 mm) in diameter, Bieler and his colleagues wrote in the study.

The snails are colorful creatures, with bright-orange faces that are visible through the openings in their shells, Bieler said. And they sport four appendages on their worm-like bodies, two of which are connected to slime glands similar to those used by garden snails to produce sticky trails.

But T. vandyensis uses its slime in a different way: It casts mucous strands in Spidey-style nets to trap plankton and other organic material. Afterward, it hauls in its prizes, eats the gooey net along with whatever food it was able to catch, and recycles the slime to produce a new snare, Bieler told Live Science.

There may even be chemical agents in the nets that protect the snails from predators. Another group of scientists working with worm snails in the Red Sea found evidence of bioactive metabolites — compounds affecting living tissues — in their slime nets, which could explain why predatory fish keep their distance from the worm snails in Florida, Bieler said.

"If one of the snails' tubes is damaged, the fish will eat them," he said. "But as long as there's a mucous net, they stay away — apparently, the mucous net also seems to be a means to deter the fish."

Scientists first spotted three of the snails on the shipwreck in 2012. Though Bieler had worked with this family of snails since the 1990s, he had never seen it in the western Atlantic before, and the research team suspected that it might be a new species, Bieler said.

When the researchers returned to the wreck less than two years later, the snails numbered in the tens of thousands, Bieler said. Based on their knowledge of worm snails, specimens from museum collections documenting local species, and DNA analysis, the researchers determined that the worm snails belonged to an undescribed species. Genetic evidence confirmed that the species' closest relatives were all from the Pacific Ocean, hinting that the animal was not native to the region, the study authors wrote.

In fact, invaders from the Pacific, including a large oyster species, had already been identified on the shipwreck, Bieler noted.

"Other species have taken the same pathway," he said. "That made it even more likely that this new one may have come from the Pacific."

The new snail is not likely to be the last invader to settle on this artificial reef, Bieler said. Any recently sunken vessel in which a reef ecosystem is still forming and where predators have yet to claim their territory offers the perfect opportunity for a wandering species to settle in — "even a fairly wimpy one," he told Live Science.

"I would like to do a monitoring program along the coastline to involve divers and dive programs," Bieler said. "There are so many people out there taking photographs — we can alert each other about new arrivals and unusual things that are popping up."

The findings were published today (April 5) in the journal PeerJ.