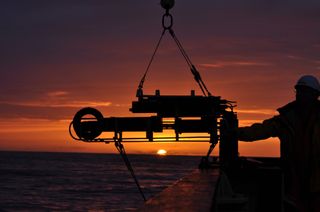 A two-week expedition to the North Atlantic is investigating how carbon enters the deep ocean.
(Image: © Christian Lindemann)

Journey through the ocean's twilight zone, where tiny marine creatures burn through tons of the greenhouse gas carbon dioxide, and one moves from light into shadow.

Here where sunlight dims, 330 to 3,300 feet (100 to 1000 meters) below the sea surface, tiny sea creatures transform carbon into forms bound for deep ocean storage. But until now, it was hard to pin down exactly how much carbon moved through this vast dimension. The creatures living in the twilight zone seemed too voracious, and estimates of their appetite for carbon outmatched the available supply.

In 2013, researchers with Britain's National Oceanography Centre explored the twilight zone near Ireland from top to bottom, measuring carbon and ocean life at all points. Now, the scientists think they can finally balance the twilight zone's carbon checkbook. The findings were published today (March 19) in the journal Nature. [Venturing to the Ocean's Twilight Zone]

"We've really increased our confidence of what is going into this zone, and what is coming out of it," said Richard Lampitt, a biological oceanographer at the center in Southampton, England.

About a quarter of the planet's carbon goes into the oceans, Lampitt said. Most of this carbon that is absorbed by the ocean later returns to the atmosphere (about 90 percent). The rest is recycled within the twilight zone, and just 1 percent falls to the sea floor.

But the carbon that makes it past the bottom of the twilight zone stays trapped in the depths for millennia. Researchers refer to this long-term exile as the Earth's "biological carbon pump."

Understanding how carbon sinks through the twilight zone and ends up stored in the deep ocean will help researchers improve climate models and understand the balance of the planet's carbon cycle.

The first place that carbon moves from the atmosphere into the ocean is at its sun-warmed surface, where microscopic floating plants called phytoplankton consume carbon dioxide for energy (just like grass and trees). When phytoplankton die, they sink into the twilight zone. These decaying plants are joined by falling particles of flesh, soot and sand — a constant deluge called marine snow. Carbon arrives in the twilight zone via this marine snow.

In the Porcupine Abyssal Plain, about 350 miles (560 kilometers) southwest of Ireland, Lampitt and his colleagues collected marine snow and the creatures that consume it at different depths. They also measured how different organisms use carbon — transforming it into carbon dioxide — rather than just eating the particles, Lampitt said.

"It's very important to draw the distinction between burning up carbon, actually using it by transforming it from organic into inorganic matter, and just eating it," he said.

"What's being lost at the bottom is entirely determined by the processes within the twilight zone," Lampitt told Live Science.

"If it wasn't for the zooplankton chewing them up and defecating, the bacteria wouldn't be able to get their hands on it," Lampitt said. "And most of the work is actually done by the bacteria."