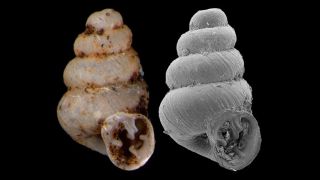 The shell of the new land snail species Gastrocopta sharae, seen under a light microscope (left) and under a scanning electron microscope (right).
(Image: © Rodrigo B. Salvador/CC-BY 4.0)

A new species of cave-dwelling land snail from Brazil recently received a scientific name that recalls its subterranean habitat in a uniquely geeky way. Scientists named the tiny mollusk after the character Shar, the goddess of caverns, darkness and secrets, from the popular role-playing tabletop game Dungeons & Dragons.

Researchers discovered a variety of land snails and freshwater snails while conducting a survey of caves in central Brazil, including a diminutive new species, which they dubbed Gastrocopta sharae.

"It's a fitting name for a tiny snail that lives hidden in the dark recesses of a cavern," the study authors said in a statement. [Photos: Gorgeous Neon Malaysian Snails]

For the most part, snails that live in Brazil are poorly understood and are not widely studied — compared to the number of known mollusk species, as many three times that number may remain to be discovered, the researchers wrote in the study.

Cave systems are notable for their biodiversity, but they are also exceptionally fragile, particularly in central Brazil, where ecosystems are threatened by climate change and human activity. To protect mollusk diversity in underground grottos, conservationists first need to know what species are living there, the study authors explained.

"Mistress of the Night"

Scientists collected snail shells and living specimens from nine caves in the states of Bahia and Goiás. Most of the caves contained a body of water, surrounded by clay or wet sand. The researchers found 21 snail species, including G. sharae, and seven of the 21 species were identified for the first time as native to the region.

G. sharae measures about 0.08 inches (2 millimeters) in length, and has a cone-shaped, spiraling shell. Its tiny body does not appear to possess the bewitching qualities of the dark deity Shar, who was also called "The Lady of Loss" and "Mistress of the Night" when she first appeared in issue 54 of the role-playing strategy magazine "Dragon," published in October 1981.

The researchers previously showed their fondness for Dungeons & Dragons in a study published in October 2014 in the journal Zootaxa, when they named a new species of deep-sea snail Halystina umberlee, drawing inspiration from the game's sea goddess character, Umberlee.

Investigating unexplored ecosystems is a vital part of shaping conservation strategies for those systems, particularly for areas that lack official protected status — and cavern environments in central Brazil are known to be especially vulnerable due to mining activity, the researchers said in the statement.

"It is our hope that the present work is a step towards proper legal protection of such fragile ecosystems," they wrote in the study.

The findings were published online Feb. 15 in the journal Zoosystematics and Evolution.