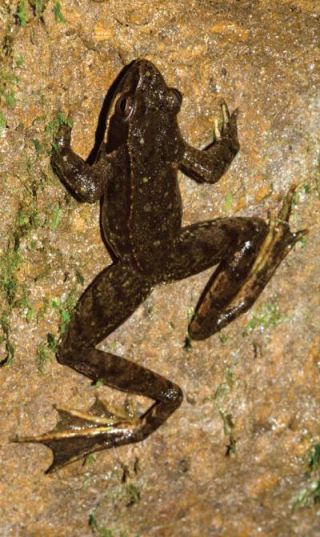 The Iberian frog is the first frog in Western Europe that has been observed living its entire life underground.
(Image: © Gonçalo M. Rosa)

The Iberian frog, like most of its hopping ilk, is commonly found aboveground, dwelling among the streams of Portugal and Spain. But new research shows the animals can, and do, make a living underground.

The study found that Iberian frogs can breed and live their entire lives in cavelike chambers, the first time this has been seen for a frog in Western Europe. The creatures were observed breeding in underground drainage compartments built beneath Portugal's Serra da Estrela Natural Park; aboveground the animals are also found in "small ponds, humid meadows and soaked fields," the authors wrote in a study.

Although frogs and toads are known to inhabit caves during certain parts of their life cycles, or to seek their moderate, consistent temperatures, no frog in the world is known to live solely underground, according to the research.

It's unclear exactly why the Iberian frogs moved to these chambers, or how exactly they get along in total darkness. They certainly face some competition: Scientists observed a species of salamander eating their eggs.

The study, published recently in the journal Subterranean Biology, shows how little is known about life in caves and other subterranean chambers, even in relatively well-explored areas like Western Europe.

Scientists have expressed fears that a preference for underground habitats might be a sign of the "ecological dangers of the dramatic climate change experienced by the Iberian region," according to a news release describing the study.

The chambers are also used by another species of salamander, the golden-striped salamander. The species is considered vulnerable (one step above endangered) by the International Union for Conservation of Nature.