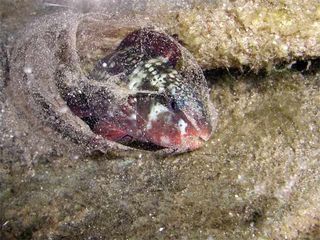 Parrotfish (Chlorurus sordidus) secrete mucous from their mouths that they use to create a gooey cocoon around themselves possibly to protect against biting parasites.
(Image: © A. Grutter.)

Just as some people must sleep with mosquito nets to ward off the bloodsuckers, coral reef fish apparently spin cocoons of mucus before slumbering to keep away biting parasites, scientists find.

Coral reef fishes such as parrotfishes and wrasses sleep soundly in mucus cocoons that have long fascinated recreational scuba divers and are often a main attraction on night dives. Surprisingly, until now, no experimental studies had examined their function. [Image of parrotfish with cocoon]

Past observational studies have suggested these gooey blankets, which are secreted from the fishes' mouths, somewhat protect fish from nocturnal predators such as moray eels. However, researchers also found many cocooned fish were still eaten.

To find out why these cocoons are created, scientists concentrated on parasitic crustaceans known as gnathiid isopods (tiny shrimp-like creatures), which feed on the blood of fish. During the day, parrotfish seek out cleaner fish to remove these "marine mosquitoes," explained researcher Alexandra Grutter, a marine biologist at the University of Queensland in Australia.

For the study,  researchers focused on the bullethead parrotfish (Chlorurus sordidus). Each parrotfish has to be caught separately by a scuba diver using a large 6-foot-by-45-foot (1.8 meter by 13.7 meter) net; swimming underwater with a rolled-up net takes stamina, Grutter said. Also, "parrotfish are extremely slippery so getting them from a hand net to a catch bag is very tricky," Grutter added. "Parrotfish also have a mouth shaped like a beak, hence their name, so you want to avoid sticking your finger in their mouth when putting them in a bag."

Back at the lab, the researchers compared fish coated with mucus with ones the researchers gently pushed out of their cocoons without disturbing their snooze. The slumbering fish were then exposed to the parasites for 4.5 hours.

The scientists found that nearly 95 percent of the fish without the cocoons were attacked, compared with just 10 percent of those coated in mucus.

The researchers estimated crafting these cocoons takes up 2.5 percent of the fish's daily energy.

"The amount of effort that goes into building these cocoons, which requires fish to have developed very large glands about the size of [a] quarter to produce the cocoons, is extraordinary," Grutter said. "Parasites must exert an enormous pressure on these fish in order for the fish to have evolved such a specific way of avoiding the parasites."

The parasites might not simply only wound the fish. "These parasites have been implicated in transmitting a blood parasite, which resembles malaria," Grutter explained.

It remains uncertain exactly how the cocoons protect the fish. "Are they a physical and/or chemical barrier, or do the cocoons prevent the parasites from detecting fish by blocking fish odor?" Grutter asked. "What other organisms are deterred by the cocoons? Research in the wild would be interesting, but this is inherently dangerous due to the dangers of working underwater in the dark and other nocturnal predators of humans, such as sharks."

It is also an open question as to whether the fish can recoup part of their investment by eating the cocoons.

"I have observed on occasion a fish at dawn with what appeared to be mucus stuffed in its mouth," Grutter told LiveScience. "I have observed another fish that produces cocoons, the cleaner fish Labroides dimidiatus, pecking away at its old cocoons in the morning."

The scientists detailed their findings Nov. 17 in the journal Biology Letters.