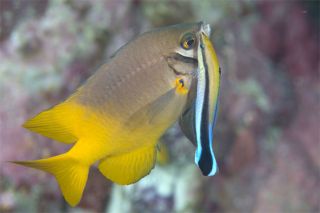 Fish may dine underwater, but they still need to remember their manners at mealtime.

Males of a certain fish species will punish females when they misbehave while eating, a new study finds.

And the chastisement occurs even though the males are not directly affected by the female's trouble-making, indicating that these fish may exhibit a form of human social behavior known as third-party punishment, the researchers say.

The fish, called Labroides dimidiatus, are a type of "cleaner fish," getting their name from the fact that they clean larger marine inhabitants by removing tiny parasites, which become food for the smaller fish. While the cleaner fish's "clients" are happy to have their bodies tidied of parasites, they become irritated if the cleaners take a bite out of their mucous tissue, and may even swim away.

Although mucus may not sound like the most appetizing meal, cleaners actually prefer to eat mucus. But the cleaners must resist this temptation if they want their dinner to stick around.

Researchers at the Zoological Society of London recreated this three-party dilemma in laboratory experiments, using an underwater plate to represent the client fish. The plate contained both fish flakes and prawns, with the latter being the much preferred cuisine.

However, the researchers took away the plate if any of the fish ate a prawn (as if the client were to swim away). They saw that the male cleaner fish — even in this unfamiliar lab setting — would punish, or chase away, the female fish if the females ate a prawn. Once the females had been chastised, they were less likely to gulp down prawns.

While the male behavior may seem altruistic — since the clients, not the males, are the victims of the female's bites — the males are actually acting in their own self-interest. "By punishing cheating females, the males are not really sticking up for the clients but are making sure that they get a decent meal," Nichola Raihani, a study author, said in a statement.

The researchers suggest that in a natural setting, the males might benefit with more food if they punished bad-mannered females.

The results are published in the Jan. 8 issue of the journal Science.