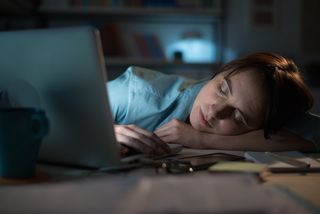 WASHINGTON — Where you live within your time zone could be associated with a slightly increased risk of developing certain cancers that have been linked to disruptions of the biological clock, a new study suggests.

People's biological clocks can become out of whack — which scientists call "circadian disruption" — if they work the night shift, for example. Such disruptions have been linked to an increased cancer risk in shift workers, said Dr. Neil Caporaso, an epidemiologist at the National Cancer Institute and the lead author of the study.

But the disruptions that shift workers experience in their circadian rhythms are major, because they switch from working during the day to working at night. Caporaso and his team were curious about whether smaller, subtler disruptions to the biological clock could also have an effect on people's cancer risk. [10 Do's and Don'ts to Reduce Your Risk of Cancer]

Indeed, most people experience small disruptions in their circadian rhythm in the form of social jet lag, Caporaso told Live Science. Social jet lag is commonly thought of as getting up at the same time during the week, and then sleeping in on the weekend when you don't need to get up early for work, he said.

But social jet lag can also occur across a time zone, Caporaso said.

What time is sunrise?

Within a given time zone, dawn and dusk times at any spot vary: Moving 5 degrees of longitude westward across a time zone is equal to a 20-minute delay in sunrise, according to the study, which Caporaso presented here today (April 2) at the American Association for Cancer Research's annual meeting. The findings have not been published in a peer-reviewed journal.

For example, when a person in Boston wakes up at 8 a.m., it's light out, Caporaso said. But when a person living in Ohio gets up at the same time, in the same time zone, it could still be dark outside, he said. The sunlight in Boston cues that person's biological clock that it is morning, but the person in Ohio doesn't get that same cue when he or she wakes up, he said. This leads to a discord between the time on the clock and the biological clock.

Social jet lag has been linked to various conditions including obesity and diabetes, Caporaso said. In the new study, the researchers focused on cancer.

Cancer and the biological clock

In the study, the researchers looked at data on 4 million white adults who had been diagnosed with cancer between 2000 and 2012. The people in the study lived in more than 600 counties in 11 states, all within the continental U.S.

Results showed that for every 5 degrees of longitude toward the west that a person lived from the eastern edge of their time zone, his or her risk of developing any type of cancer increased by 3 percent in men and 4 percent in women.

All of these increases in cancer risk are relatively small, and Caporaso said that more studies are needed to establish whether there may be a cause-and-effect relationship between cancer and disturbances to a person's biological clock. [5 Surprising Sleep Discoveries]

The mechanism that may link circadian rhythms and cancer isn't clear, Caporaso said. But it could have to do with a relatively recent change in humans' daily lives, he said.

All throughout life on Earth, there was one constant, Caporaso said: Living things were exposed to the sun during the day and darkness at night. "Suddenly, we're not doing that," he said. People are indoors during the day and exposed to bright lights at night, he said. This could lead to lower levels of melatonin at night, the hormone linked to sleep, he said. It's possible that the lower levels of melatonin could affect the immune system, and raise a person's risk of cancer, he said.

Although more research is needed, Caporaso said it's likely that everyone could benefit from exposure to more natural light during the day and avoiding light at night.