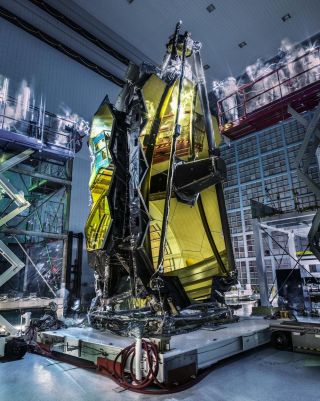 An image captured in darkness of the James Webb Telescope in a clean room makes the people bustling around it look like ghostly apparitions
(Image: © Chris Gunn/NASA)

When the lights go out, the ghosts come out to play.

That's what it seems like in an eerie photograph taken of the James Webb Telescope in a specialized clean room, with the lights out. Because of the long exposure needed to take a picture in the dark, the clean-room scientists bustling around the telescope resemble wraiths in the photograph, Chris Gunn, the NASA photographer who took the image, said in a statement.

A long exposure means the camera's shutter is left open for a long period, giving ample time for the few light particles, or photons, in the dark to hit the sensor or photographic paper and create an image of the object. As a result, moving objects appear blurry, because the light particles reflecting from them come from different locations while the shutter is open, while stationary objects remain crisp, as in this picture.

The darkened photo was taken in the clean room after the telescope underwent acoustic and vibrational testing, according to the statement. It is easier to see contamination that occurs after testing in the darkness, so technicians look for it using ultraviolet light and bright flashlights during their inspection. The testing took place at Spacecraft Systems Development and Integration Facility (SSDIF) at NASA's Goddard Space Flight Center in Greenbelt, Maryland

The James Webb Telescope, designed to be the successor to the prolific Hubble Space Telescope, is the largest and most powerful telescope ever built. It is set to launch from French Guiana in 2018, according to NASA. Unlike Hubble, which orbits Earth, the James Webb will circle the sun, around 1 million miles (1.5 million kilometers) away from Earth at the so-called second Lagrange point (L2). At this spot, the observatory can stay in line with Earth as it orbits the sun. A large sunshield will protect the telescope from solar light and heat.