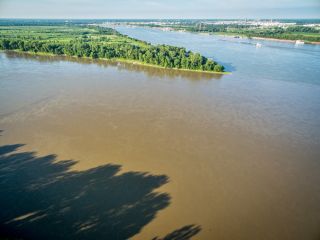 The Mississippi River is one of the world's major rivers. It flows through the center of the United States, and historically it has been the dividing line between the Eastern United States and the American West.

The river's watershed is the world's fourth largest. It includes all or parts of 31 states and two Canadian provinces. It covers about 1.2 million square miles (1.9 million kilometers), or about 40 percent of the lower 48 states, according to the NPS.

The Mississippi River begins at Lake Itasca, a small glacial lake in northern Minnesota, and flows southward for about 2,350 miles (3,782 km) until it reaches the Gulf of Mexico. The river passes through or borders 10 states: Minnesota, Wisconsin, Iowa, Illinois, Missouri, Kentucky, Tennessee, Arkansas, Mississippi and Louisiana.

The Mississippi River is narrowest at its headwaters — between 20 and 30 feet (6 to 9 meters), according to the National Park Service (NPS). The river's widest point — not counting some lakes in Minnesota and Wisconsin — is just downstream from its confluence with the Missouri River, near Alton, Illinois. There, it is 1 mile (1.6 km) across, according to Mississippi River Explorer. (Lake Winnibigoshish near Bena, Minnesota, is 11 miles, or 17.7 km, wide.)

Other statistics, according to Mississippi River Explorer, include:

Speed: The average surface speed of the water at the headwaters is about 1.2 mph (2 km/h); at new Orleans it is about 3 mph (4.8 km/h). A raindrop that falls in Lake Itasca would reach New Orleans in about 90 days.

Elevation: Lake Itasca is 1,475 feet (450 m) above sea level. The Gulf of Mexico is at sea level. More than half of the drop in elevation occurs within Minnesota.

The name Mississippi comes from Messipi, which is the French rendering of the Anishinaabe word Misi-iibi, meaning "Great River." The Anishinaabe is the group name for several tribes living in the northern parts of the United States and Canada. Anishinaabe living in the upper Mississippi River basin include the Ojibwe and Potawatomi tribes. Other tribes that settled along the Mississippi River basin include Cheyenne, Sioux, Ho-Chunk, Fox, Kickapoo, Tamaroa, Moingwena, Quapaw and Chickasaw.

The second largest city in North America before European colonization (after Tenochtitlan in Mexico) was situated along the Mississippi River, on the opposite shore from modern-day St. Louis. Cahokia flourished from about A.D. 1050 to 1300 and was larger than London was at that time. The city encompassed at least 120 mounds and a population between 10,000 and 20,000 people spread out over six square miles (16 square kilometers).

The Treaty of Paris in 1783, which ended the Revolutionary War and recognized American independence, marked the Mississippi River as the western border of the new nation. In 1803, President Thomas Jefferson, with the Louisiana Purchase, greatly expanded the size of the country with land west of the river. The Jefferson National Expansion Memorial, better known as the Gateway Arch, situated on the west bank of the Mississippi River in St. Louis, Missouri, commemorates Western expansion.

The Mississippi River basin is home to hundreds of species of animals. White-tailed deer, bald eagles, otters, muskrats and wild turkeys are commonly seen in the wetlands and hardwood forests of the upper Mississippi River valley. Crawfish, shrimp, catfish, snakes, turtles, alligators, herons, spoonbills and leeches make their homes in the southern portion of the river, its delta and many bayous. About 260 species of fish — about 25 percent of all fish species in North America — live in the Mississippi River, according to the NPS.

About 60 percent of all North American birds — including about 8 million ducks, geese, swans and wading birds — use the Mississippi River basin as their migratory flyway, according to the NPS. Species of migratory ducks include the black, wood, mallard, teal widgeon, pintail and ring-necked ducks. Canada geese, swans, coots, double-crested cormorants, bluebirds and pelicans are also common in the basin, according to 4rivers.com.

The Mississippi River has one of the most diverse populations of freshwater mussels in the world. From the river's source in Lake Itasca down to Cairo, Illinois, there are 38 documented species of mussels. On the Lower Mississippi, there is an estimated 60 species, according to the NPS. Mussels eat by filtering the water and are excellent indicators of the health of an aquatic ecosystem, according to the Fish & Wildlife Service (FWS). They are long-lived animals, sometimes existing in one spot for over 100 years.

In the late 19th century, mussels became big business in the Mississippi River. So big, in fact, that some historians compare the sudden fever for mussels to the Gold Rush in California, according to the FWS. People killed millions of mussels not only for their prized pearls, but also for their shells, the latter of which could be made into trendy buttons. By 1899, 60 button factories had sprung up in the Mississippi River Valley. These factories harvested over 21,000 tons of shells. Unfortunately, in the mad rush for mussels, entire mussel beds were eliminated in some parts of the river.

Although the mussel-shell button craze is long over, mussels are still quite vulnerable to pollution and other man-made changes to the river. Conservation groups are keeping a close eye on the different mussel populations and the health of their environments. In North America, about 129 of the 300 species of freshwater mussels are in danger of extinction, according to the FWS. Four mussel species that live in the Upper Mississippi basin are protected under the Endangered Species Act of 1973.

Over a period of about 7,000 years, the Mississippi River has been winding its way south, depositing sand, clay and other organic materials into the shallow waters of the northern Gulf of Mexico. As this sediment accumulated, plant communities started to spring up, trapping more sediment and building new land — what is now known as the Mississippi River Delta. But over the last few hundred years, human activity has led to the delta's collapse, according to Restore the Mississippi River Delta, an environmental group. Since the 1930s, about 1,900 square miles of Louisiana land have disappeared into the gulf. This has been further exacerbated by natural and man-made catastrophes, such as the devastating Hurricane Katrina and the BP oil disaster.

"This land loss has been caused by a number of factors, including leveeing of the Mississippi River for navigation and flood control (which cut the tie between the river and surrounding coastal wetlands, which rely on the river for fresh water and sediment), oil and gas and navigation canals, subsidence and sea level rise," Cochran told Live Science.

"In Louisiana, not only are the seas rising, but the land is also sinking — a double whammy known as relative sea level rise," Cochran said. "And as these coastal wetlands turn into open water, communities, homes and cities like New Orleans are more vulnerable to flooding from storm surge and hurricanes."

The good news, Cochran said, is that Louisiana has a plan to rebuild the coastal wetlands. Several projects are coming together to rebuild Louisiana's disappearing coast and to protect the people, communities and industries that live and work there.

The Mississippi River has influenced American culture for centuries. John James Audubon, who lived for a time in New Orleans, was a naturalist who painted and described the birds of North America. His masterwork, "The Birds of America," was a series of 435 life-size bird prints, published in sections between 1827 and 1828. A good portion of his work was completed in New Orleans and southern Louisiana, where he spent much of his time observing the local birds.

The Mississippi River was fertile ground for the birth of the blues and jazz as the music of enslaved African Americans melded with French, Spanish and Creole traditions to create a new musical form. The Mississippi delta area has produced the largest number of influential blues artists in the country, according to the Public Broadcasting Service (PBS). New Orleans, Memphis, St. Louis all became major centers for blues music.

Author Samuel Clemens (Mark Twain) was born in 1835 and grew up in the small river town of Hannibal, Missouri, during the "Golden Age of Steamboats" (1830-1850). His childhood adventures and his adult work experience on the Mississippi River — he worked as a steamboat pilot for four years — were a source of inspiration for his books "The Adventures of Tom Sawyer," "The Adventures of Huckleberry Finn" and "Life on the Mississippi."

The Mississippi River also inspired "Show Boat," a musical by Jerome Kern and Oscar Hammerstein II, which tells the story of a family of performers aboard a Mississippi riverboat during the 1800s. The most famous song from the show is probably "Ol’ Man River," with lyrics such as: