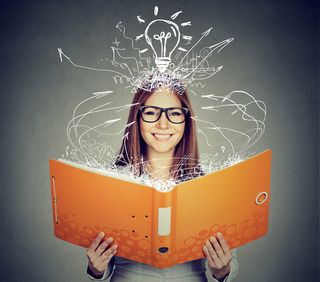 It's like a magic trick: Some people can memorize a long list of hundreds of random words and numbers in seconds, and then recite it perfectly hours later. But unlike magicians, these memory athletes are open about the secrets of their trade.

They use a well-known memory method called the method of loci, and now a new study shows that many people can learn this method.

Ordinary people can learn these special memory strategies over just a few weeks, and then, they can perform almost as well as memory athletes, researchers found. What's more, learning the method of loci appears to reshape neuronal networks in people's brains. It induces brain activity patterns that resemble those of memory athletes, researchers reported today (March 8) in the journal Neuron. [10 Ways to Keep Your Mind Sharp]

The method of loci, also called the memory palace, has been around for some 2,500 years and is one of the oldest cognitive strategies known. It involves associating random pieces of abstract information with familiar visual and spatial cues to help those random pieces stick better in your memory. For instance, to memorize a list of numbers, you can visualize yourself walking through a familiar house and assigning each number to an object: Zero could be the handle on the entrance door; 1 is the lantern hanging above you, and so on.

In the study, researchers in the U.S. and the Netherlands compared ordinary people with 23 of the world's leading memory athletes, who had been among the 50 top-scorers at a competition called the World Memory Championships.

As expected, the athletes' superior memory was evident. In one experiment, for example, 17 memory athletes memorized a list of 72 words and could correctly recall all the words, 20 minutes later. In contrast, participants with ordinary memory skills recalled, on average, 40 of the words.

The researchers then looked at the structure of the participants' brains, searching for any difference that could explain the champions' superior memory skills.

"The surprising finding was that we didn't see much there," Martin Dresler, the study's first author and an assistant professor of neuroscience at the Donders Institute for Brain, Cognition and Behavior in the Netherlands, told Live Science. "There was no brain structure that really stood out." [6 Fun Ways to Sharpen Your Memory]

This finding confirmed memory athletes' own accounts that they were not born memory prodigies, but had learned to use strategies. In other words, it's not the brain's hardware that makes these people different, but the software, Dresler said.

How learning the software changes the brain

In the second part of the study, the researchers aimed to test what happens in the brain when regular people learn and practice using the method of loci. Fifty-one participants were divided into three groups. The first group took a six-week course of daily, online-training sessions in the method of loci. The second group received another type of training to generally improve their working memory, and the third group did not train at all.

After the training, the participants took the 72-word memorization test again. The first group that had been training with the method of loci showed "striking memory performance," doubling the number of words they could recall, Dresler said. Neither of the two other groups showed such an improvement.

The first group was still showing this improvement four months later, when the researchers tested the participants again. This suggests that once people learn the strategy, they keep it.

Brain scans of the participants that were conducted before and after the training showed that the people who learned the method of loci developed connectivity patterns that resembled those of memory athletes.

In future studies, the researchers plan to monitor the brain as participants carry out memorization tasks, Dresler said. In this study, the researchers scanned the participants' brains as they were resting, without engaging in any tasks, in order to measure the baseline activity patterns. [Top 10 Mysteries of the Mind]

The scientists have an idea to explain why the method of loci is an effective memory strategy. "It heavily uses skills that were important during our evolutionary past as humans," Dresler said. "It was never important to memorize abstract information such as names or numbers. What was important was how to find our ways, or where to hide our food. Therefore, our brains evolved to be good at memorizing these kinds of information."

In other words, the method of loci enhances our memory by taking advantage of the neural networks for visual and spatial information and putting them to work to process other types of data, he said.

Although the ability to memorize long lists of words is an impressive skill, it doesn't appear to spill over to other cognitive areas or even other types of memory abilities. (Memory athletes note that they are as likely as anyone else to forget their keys.)

Nevertheless, Dresler noted, the technique has been shown time and again to be a very effective memory strategy and could be useful to people whose jobs involve memorizing massive amount of information, such as historians and physicians.