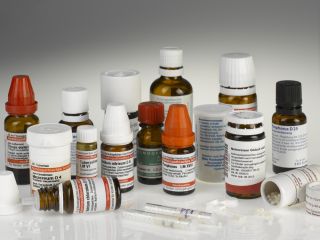 The U.S. Food and Drug Administration announced Dec. 18 that it plans to crack down on dangerous or dishonestly advertised homeopathic products — a class of products that sellers claim treat diseases by delivering extremely diluted traces of the substances that cause those diseases in the first place. If certain homeopathic remedies become more difficult to access due to the crackdown, what will homeopathy users miss out on?

Homeopathy dates to the 1700s, according to a statement from the FDA, and relies on the idea of "like cures like" — that symptom-causing chemicals can, at low enough doses when mixed with water, treat the symptoms that those substances cause. In other words, a chemical that causes vomiting would be given at a very diluted concentration to treat vomiting. And the more diluted the substance, the more potent the beneficial effects, the thinking goes. [11 Surprising Facts About the Immune System]

But is there any real science behind this idea?

The British Homeopathic Association (BHA)'s website acknowledges that homeopathic remedies might seem "implausible for many people," because "the medicines are often — though by no means always — diluted to the point where there may be no molecules of original substance left."

BHA offers two partial explanations — both commonly expressed by homeopathy advocates — for why homeopathic remedies might nonetheless have benefits for people who take them.

The first is that a homeopathic substance, even diluted to the point that it no longer can be detected by even the finest instruments in a sample of water, changes the structure of the hydrogen bonds in the water. Homeopaths term this supposed effect "water memory."

But May Nyman, a chemistry professor at Oregon State University, told Live Science that the whole idea of "water memory" doesn't make sense.

"I don't believe in water memory, because water molecules move. They're constantly rotating with respect to each other, forming hydrogen bonds, breaking hydrogen bonds," Nyman said. In other words, there's no structure in a solution of liquid water permanent enough to account for any long-term memory, she said.

"Introducing ions [electrically charged particles] certainly can change the pattern of bonds," Nyman added. "But the further out you get from a single ion in the solution, the more muted the effect. Just a few layers of water, and the water molecules further away will ignore that ion."

Richard Sachleben, a retired chemist and member of the American Chemical Society's panel of experts, agreed. The idea "doesn't stand up to scientific scrutiny," Sachleben told Live Science. Experiments that claim to prove water memory, or structure in water, can't be reproduced, he said.

Both Nyman and Sachleben also pointed out even if a structure remained in a sample of diluted water, that structure would annihilate itself on contact with your body.

"Your mouth is full of stuff — bacteria, bodily fluids, leftovers from your lunch," Nyman said. All of those substances invade any purified water they come in contact with, she said, overwhelming whatever minor ionic-structure effects might exist. If water has memory, a body is a messy system primed to wipe out that memory, she added. [7 Absolutely Evil Medical Experiments]

If the water memory somehow survived contact with a homeopathy user's mouth, the memory would then face an even more destructive environment in the stomach, where the stomach's acid would have a huge impact on the hydrogen bonds in water, Sachleben said.

So that's that for the hydrogen bond theory. But what about the second explanation?

The second explanation proffered by the BHA argues that undetectable "clumps" of the substance remain in the water, creating bubbles of gas inside it, which have some positive effect.

"Regarding clumps in solution, molecules that are more attracted to each other than the water do clump together," Nyman said. "Unless you de-gas a liquid, there are going to be gases inside. I've seen it with my own eyes when we de-gas liquids in the lab. If you change the pressure of the liquid, bubbles do emerge — that's true."

But those clumps and gases are present in any solution of water, she said. There's nothing special about homeopathic remedies in that respect.

And that gets to what both Nyman and Sachleben identified as the first and most obvious flaw in homeopathic thinking, from a chemist's perspective: There's really no such thing as hyperpurified water.

For homeopathic substances to dominate their chemical environments at the tiny concentrations — far beyond the ability of a mass spectrometer to detect — that homeopaths claim to achieve, these substances would have to be the most significant chemicals present in their solutions. In other words, the water could not contain other substances, and would have to be remarkably pure. And that level of purity just isn't possible, the chemists said.

That's because the purer water gets, the more greedily it sucks ions from the surrounding environment, she said. Ambient dust, plastic containers and other impurities all have similar contaminating effects on even the most pristine water.

"I think that it's highly [unlikely]," Sachleben said, that any ultradiluted chemical could have medical benefits — if for no other reason than that outside contaminants will always overwhelm the solution.

Sachleben did note that there is a degree to which the basic premises of homeopathy do make sense in terms of modern science and medicine.

"The fundamental concept that some things at high doses are poisons and at low doses are medicines is absolutely a fact. And there are poisons that are highly toxic that are now used in medicine," Sachleben said.

Botulism toxin, for example, has killed human beings for millennia. But in recent decades, doctors have used the substance to treat conditions from migraines to facial wrinkles.

"It's taking [that idea] to an extreme," Sachleben said, "diluting it down such that there's none left — that doesn't make sense."