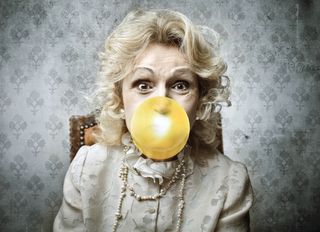 Have trouble recalling your second-grade teacher's name, or even just what you ate for dinner last night? If so, that's natural: Both long-term and short-term memory tend to worsen as people age. The more neuroscientists learn about this process of decline, however, the more tricks they've uncovered for how to slow — or even reverse — the process.

Here are six such tricks for lifting your cognitive fog.

Wake up and smell the rosemary

Scientists have found that aromas can profoundly affect people's cognitive abilities. In a 2003 study, psychologists asked 144 volunteers to perform a series of long-term memory, working memory, and attention and reaction tests; some subjects worked in a scent-free cubicle, some in a cubicle infused with essential oil from rosemary, and the rest worked in cubicles scented with lavender oil.

If you need your brain to perform at its best, you can try placing a rosemary plant on your windowsill but, unfortunately, you ought to avoid stopping to smell the lavender. [Album: Ways to Sharpen Memory]

Everyone hopes to age gracefully, both inside and out. Scientists say a good diet is one of the main differences between those who are vivacious at 70 and those who look haggard at 40.

To keep your memory young as your brain gets old, scientists recommend eating foods that are high in antioxidants, such as blueberries, apples, bananas, dark green vegetables, garlic and carrots. Antioxidants are molecules that easily bond with and neutralize electrons called "free radicals" that float around in the blood stream. These free radicals, which accumulate in your body as you age, can kill brain cells — but not if you kill them first.

Secondly, the brain is built mostly of healthy fats, including the most important of them, Omega-3 fatty acids. In order for the brain to repair itself and keep its neurons firing properly, you must provide it with the right raw materials. Omega-3s are found in many types of fish and nuts.

Your brain might like some dessert, too. Research shows that eating chocolate may improve memory and cognition, because it is rich in antioxidants called flavanols. Don't go overboard, though; chocolate is also chock full of sugar and saturated fat, which can make you sluggish.

Juicy fruit for the brain

No one quite knows why, but research shows that chewing gum boosts memory. A 2002 study conducted in the United Kingdom found that gum-chewers performed significantly better on tests of both long-term and short-term memory than did empty-mouthed people.

In the decade since, scientists have been trying to figure out why this is the case — and if it really is. Some variations on the initial study probing the effects of gum-chewing on cognition have found null results (i.e., gum didn't affect people's performance one way or the other), while most studies have identified a small but significant effect.

Scientists have various hypotheses to explain the boost. Perhaps chewing gum simply gets your juices flowing by increasing your heart rate; or maybe it affects the function of a brain region called the hippocampus by causing the body to release insulin in preparation for food. Whatever the reason, chewing gum seems to give you a slight mental edge. [Forget Why You Walked in a Room? Doorways to Blame, Study Finds]

To keep your brain in shape, make it sweat. Thinking hard really does sharpen your memory and cognition, and as the evidence for this has accumulated, a huge number of "brain fitness" programs have hit the market.

A program called Lumosity, developed with the help of neuroscientists and cognitive psychologists from Stanford University and the University of California at San Francisco, is specifically designed to help aging people improve their memory, concentration, alertness and even mood. Free online registration gives you access to more than 30 games; paid registration lets you track your progress and get feedback about your results.

And of course, there are always classic brainteasers such as Sudoku and crossword puzzles that challenge your powers of logic and knowledge recall and will help keep those synapses firing. [Why Don't We Remember Being Babies?]

When your lights switch off, your brain doesn't. As you sleep, your brain replays the memories of the day, and consolidates them for long-term storage.

That's what research on lab rats suggests, anyway. While rats sleep, two brain regions — the hippocampus and the medial prefrontal cortex, a region involved in the retrieval of memories from the distant past (in both humans and rats) — run through a sped-up version of the day's events. The process is believed to be important for consolidating and neatly filing away those newly formed memories. [Busting the 8-Hour Sleep Myth: Why You Should Wake Up at Night]

As a corollary, skipping a night's sleep will cause your new memory files to get mixed up or lost, and they'll be near impossible to retrieve later.

Walk back in time

Physical exercise doesn't just bulk up muscles, it bolsters gray matter, too. Research shows that the memory center in the brain called the hippocampus shrinks as you age, but a 2011 study found that older adults who walk routinely actually gain hippocampus volume.

In the study, led by Arthur Kramer of the University of Illinois-Urbana Champaign, 60 adults age  55 to 80went on three 40-minute walks per week — enough aerobic exercise to increase their heart rate. Another 60 participants did toning workouts, such as weight training, yoga sessions and stretching, for the same amount of time. After a year of toning, these participants' anterior hippocampus lost a little more than 1 percent of its volume, on average. By contrast, a year of aerobic exercise led to about a 2-percent increase in anterior hippocampus volume, reversing natural hippocampus aging by about two years.

Scientists believe these brain benefits may arise because exercise induces mild stress that triggers the production of growth factors in the brain. They may also result from greater blood flow to the brain, and thus greater delivery of nutrients and oxygen. Either way, where your memory is concerned, the research showed that aging isn't a one-way street.