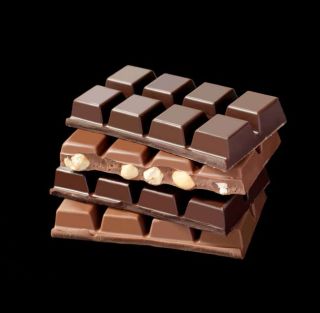 Chocolate, which we write about a lot here, is no cure-all. But in small amounts, dark chocolate has many benefits: It can help keep the heart healthy and even provide some anti-cancer benefits. It can also, in moderation, work like aspirin.

Now scientists say it helps with math. Sort of.

In the new study reported in the British media, participants given large amounts of flavanols, which are compounds found in chocolate, did better when asked to count backwards in groups of three from a random number between 800 and 999. Flavanols increase blood flow to the brain, scientists say.

"For things that are difficult to do, mentally demanding things that maybe crop up in your work it could help," said study leader David Kennedy of Northumbria University in the UK, is quoted as saying in The Telegraph.

Don't go nuts with chocolate just yet, though. When the participants were asked to count backwards by sevens, the chocolate didn't help, according to the article. Apparently that's a more complex task that uses a different part of the brain, the scientists figure. Oh, and the dose in the study? 500mg, equal to about five bars of chocolate!