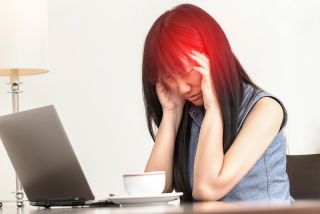 People who have migraines may one day get help from an experimental new device that is worn like a patch around the upper arm and stimulates the nerves, a new preliminary study suggests.

Researchers in Israel found that 64 percent of participants who used the device reported that it reduced their migraine pain by at least half. For comparison, 26 percent of people who used the placebo treatment said the same, according to the findings released today (March 1) in the journal Neurology.

The device, known as the Nerivio Migra, does not yet have FDA approval in the United States. [Ouch: 10 Odd Causes of Headaches]

The study was funded by the Israeli company Theranica Ltd., which developed the new device.

Using electrical stimulation to relieve pain or treat headaches is not a new idea, said Dr. Paul Rizzoli, clinical director of the John R. Graham Headache Centerat Brigham and Women's Hospital in Boston, who was not involved in the study.

Currently, there are two FDA-approved devices on the market that use nerve stimulation to treat migraines. One of them is called Cefaly and applies stimulation to the forehead of the migraine sufferer, and a second device is placed on a person's neck.

The Nerivio device is essentially a variation on a similar theme, but it uses a different location on the body to deliver the stimulation, Rizzoli said. Both of the currently approved products are worn in more visible locations than the device used in this study, which could be hidden beneath a shirtsleeve.

The company website said users can place the Nerivio wearable patch on either arm. The patch contains electrodes, a battery and a computer chip that triggers electrical pulses to the skin to stimulate sensory nerves. When a migraine attack occurs, a user can launch an app on his or her smartphone to activate the electrical stimulation and adjust the strength of the stimulation as needed.

It's unclear why electrical stimulation of the arm would help reduce migraine pain, but it may help block the pain signals from reaching the brain, the researchers suggested in their study.

In the study, the researchers recruited 71 people who suffered two to eight migraine attacks per month, but who had not used preventive medications to treat the attacks for at least two months. The participants were taught how to use the new device and instructed to use it for 20 minutes as soon as possible after the start of a migraine during the 10-month study. The users were also told to avoid any medications for 2 hours after the onset of a headache. But 27 of the participants received a placebo, or sham treatment, meaning the device delivered electrical stimulation at a frequency level too low to ease pain.

Aside from the higher percentage of participants reporting their pain was reduced by at least half with the device, the researchers found additional results: The study showed that people who wore the electrical-stimulation device and activated it within 20 minutes of the start of a migraine had a 47 percent reduction in their migraine pain on average. Those who activated the device between 21 and 60 minutes of the attack had a 25 percent average reduction.

About 40 percent of people who received the actual treatment described the stimulation as painful or unpleasant, while the rest said it was pleasant, the study said.

But Rizzoli said he did not think these findings provided strong evidence that the device is effective.

One problem, he said, was that the statistical comparison between the experimental group and the placebo group was hampered by the fact that many of the participants who got the sham treatment might have realized they were getting it. And because these participants had no pain relief, they may have stopped using the treatment before 20 minutes had elapsed. So their results were not included in the final analysis.  [11 Surprising Facts About Placebos]

In addition, the study was unusual in that the researchers reported no negative side effects from the use of the device, Rizzoli said. People who have used other devices that employ similar electrical stimulation to reduce migraine pain have reported side effects from these devices, such as burns or sleepiness, he said. These negative effects may also tend to turn up with more widespread use over time, he added.

"The study showed meager results, and there is no reason to think that this device is head and shoulders above similar stimulatory devices for migraines," Rizzoli told Live Science.

He added that some of his patients have tried the Cefaly device, which costs more than $300 and is typically not covered by health insurance, and have found that the product is reliable. He said that he might suggest the Cefaly device to someone who does not want to take a drug for migraine relief. But he said he informs these patients that the device may have minimal benefits and that medications remain the standard therapy for migraines.