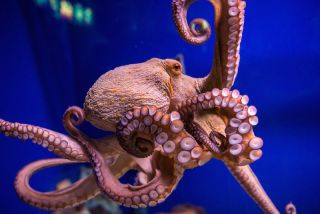 The ancestors of the modern octopus used to sport heavy shells.
(Image: © Fotokon/Shutterstock)

The ancestors of octopuses and squid once sported hard shells, but when did they lose their "mobile homes" and become agile, soft-bodied swimmers? A new study finds that this change may have occurred during the Jurassic and Cretaceous periods.

Squishy creatures like squid and octopuses rarely leave behind well-preserved fossils. That has left scientists perplexed over when in the creatures' evolutionary history these cephalopods lost their shells. Researchers have now used a mix of fossil and genetic models to solve the puzzle.

The ancestors of some modern cephalopods began to lose their shells during the so-called Mesozoic Marine Revolution. In this period, marine reptiles, certain fishes and other predators began to appear in the oceans, prompting prey to evolve to be more heavily armored or have other avoidance strategies to survive, the researchers said. Some cephalopods, like belemnites, sported internal shells, or skeletons, for instance, the scientists said. [Release the Kraken! Giant Squid Photos]

During the revolution, "we see the demise of a number of squid and octopus ancestors with more heavy internal shells," said study senior researcher Jakob Vinther, a paleobiologist at the University of Bristol in the United Kingdom. "They get replaced by these much more squishy forms that we have today, [from] around 160 [million] to 100 million years ago."

The reason? The loss of shells made the ancient relatives of the modern-day octopus, squid and cuttlefish nimbler, a feature that likely helped these animals catch prey and evade predators, Vinther said.

Cephalopods move by compressing their bodies and jetting water out of a funnel. "Reducing the shell to this great extent gave them an even bigger advantage than their ancient counterparts with larger shells inside [had]," Vinther said. "These old fellows would have struggled to jet themselves away in the same ease."

The heavy shells led to the demise of many cephalopod ancestors, because they couldn't "keep up with the 'new [shell-less] kids on the block,'" Vinther told Live Science.

The researchers made the discovery using a molecular clock technique, which helped them determine when different cephalopod branches sprouted on the family tree.

"The key element of molecular clocks, though, is the fact that mutations steadily accumulate in genetic material over time," study co-researcher Davide Pisani, a professor of phylogenomics at the University of Bristol, said in the statement. "So, by figuring out how many mutations per million years you find, and how it may vary between different groups, we can estimate evolutionary time."

Then, the researchers compared the molecular clock data with the fossil record.

"What we see is that while there is some uncertainty in molecular clock estimates, octopuses and squid appear during the Mesozoic Marine Revolution," study lead researcher Alastair Tanner, a molecular biologist and bioinformatician at the University of Bristol, said in the statement. "The two lines of evidence [fossil and genetic] come together to tell the tale of evolution."

The study was published online today (March 1) in the journal Proceedings of the Royal Society B: Biological Sciences.