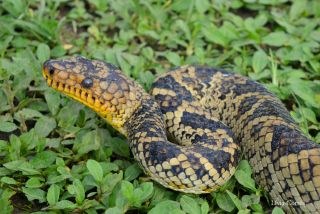 Brazil's elusive tree boa, Corallus cropanii — also known as Cropan's boa — is one of the world's rarest boas, infrequently sighted and known from only a handful of dead specimens collected after the snake was first seen and described in 1953.

However, the species is alive and well, scientists recently discovered. One of the slippery serpents was captured in January — the second living specimen ever seen, and the first glimpsed in 64 years.

The boa was brought to local scientists by rural residents of the Ribeira Valley Region, in response to extensive outreach efforts coordinated by researchers from the Museum of Zoology of the University of São Paulo and the Butantan Institute (BI), a biological research center, BI representatives explained Feb. 3 in a Facebook post.

Scientists developed the outreach program to raise local awareness about Cropan's boa — to educate community members about the snake's ecological importance and to encourage them to help biologists learn more about its habits. The boa would likely never have been captured alive without this essential collaboration, BI representatives said on Facebook. [See Photos of Snakes from Around the World]

In fact, the boa was nearly killed by one of the people who first spied it in January, according to a report in the journal Science. But two bystanders recognized the snake from fliers and posters, and intervened before the boa could be harmed. The rescued snake, a female, measured about 5.6 feet (1.7 meters) in length and weighed 3.3 lbs. (1.5 kilograms).

Cropan's boa is found only in Brazil's Atlantic Forest, in a 116-square-mile (300 square kilometers) region in São Paulo; it is the rarest type of boa in the New World and possibly the rarest on Earth, according to the International Union for Conservation of Nature and Natural Resources. The organization classifies the boa as "Endangered" because its habitat is restricted to one location that is declining in quality, and though the population size is unknown, the scarcity of sightings hints that there probably aren't a lot of these snakes to be found.

The species was described in 1953 from a single adult male specimen. Scales along its back were an olive-beige color, with dark-brown spots "that appear from the neck as far as the tail," according to a study published in May 2011 in the journal Salamandra. After that first sighting of a living animal, the only Cropan's boas seen by scientists — five in total, and all thought to come from the same Atlantic Forest region — were already dead, the study authors wrote.

Cropan's boas have never been observed in the wild. But when the recently captured female is released, she'll be carrying an implanted radio transmitter, which could provide scientists with a few more clues about how these snakes survive in their forest home.

"The snake will be studied in order to discover more information about its biology and habits. As it has never been observed in nature, we do not have much information about its behavior," Livia Corrêa, a biologist at the Butantan Institute, told Carta de Notícias. "It will be released in its natural habitat and receive equipment with radiotelemetry that will enable its tracking in nature and the transmission of information to researchers," she said.