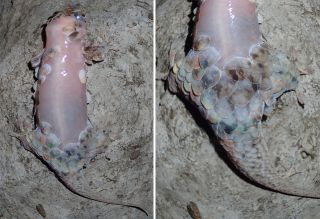 When grasped by a predator, fish-scale geckos lose not just their scales but also the skin underneath. This bizarre behavior could be important in helping them to escape.
(Image: © Frank Glaw)

A newly discovered species of gecko with unusually large scales practices a bizarre defensive strategy that might make your skin crawl: When a predator catches hold, the gecko literally jumps out of its own skin.

The species, Geckolepis megalepis, was described recently in a new study. Part of a small group known as fish-scale geckos, these creatures have scales that are larger than those of any known gecko species, the researchers said.

Each scale can be as large as 0.2 inches (5.8 millimeters) — about 8 percent of the gecko's body length — and those big scales could make the gecko especially adept at escaping predators, according to the new study. [6 Crazy Skills That Prove Geckos Are Amazing]

Whereas most geckos have small scales that lie flat against their bodies, fish-scale geckos have large, overlapping scales that are only partly attached to their skin. But what is really unusual about this genus of geckos is the layer of skin beneath those scales, which tears away easily and grows back quickly, according to the study's lead author, Mark Scherz, a doctoral candidate at Ludwig Maximilian University of Munich and Zoologische Staatssammlung München (the Bavarian State Collection of Zoology).

"Their skin has this pre-formed zone for shearing and an unusually fast regeneration cycle," Scherz told Live Science in an email. Prior studies of fish-scale geckos noted that these animals can completely regrow their scaly coverings in just a few weeks.

G. megalepsis geckos are native to Madagascar, and measure up to 2.8 inches (7 centimeters) in length, from the tip of the snout to the base of the tail, the researchers wrote in the study.

The geckos' oversize scales create a pebbly texture in mottled shades of brown and cream. But after a close encounter with a predator, the denuded geckos' bodies become shiny and pink where their scaly covering has ripped away. There is no blood or scarring, and the scales that grow back are almost indistinguishable from the original scales, Scherz said.

Capturing any small wild animal for scientific analysis can be extremely challenging, but it is even more difficult if the animal is likely to drop its skin when touched, Scherz said. So how do scientists catch these geckos without causing them to shed their scales? Very, very carefully, Scherz told Live Science.

"Generally, what we do is lure the geckos into a container or plastic bag, so that we have the minimum possible contact with them," Scherz said. "It is possible to catch them by hand without losing scales, but it takes a lot of practice and is not always successful."

Scherz and his colleagues caught three G. megalepsis specimens in northern Madagascar's Ankarana Reserve. The size, shape and distribution of its scales, as well as subtle distinguishing features in its skeleton, revealed to the study authors that it was a new species.

The unusual size of its scales — "considerably larger than any other species," Scherz said — was especially interesting to them. Previous studies of fish-scale geckos, as well as the new study's analysis, show that these types of scales are dense and highly mineralized. Growing them comes at some metabolic cost to the animal, which makes it puzzling that their main defense involves losing the scales so easily, Scherz said.

"Whatever the cost of regenerating the scales, it cannot be as great as losing your life to a predator," Scherz said. "So even when the cost could be enormous, it is worth it. That's an interesting evolutionary strategy."

Studying the scale-shedding geckos more closely could even inform medical research, he added. Understanding how the geckos' regenerated scales grow back without forming scars could assist scientists in developing techniques for minimizing or eliminating scarring during skin repair.

The findings were published online today (Feb. 7) in the open-access journal PeerJ.