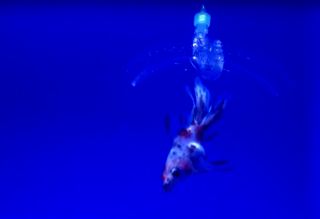 The grasping hydrogel robot was able to capture and release a goldfish.
(Image: © Melanie Gonick/MIT)

Squishy, nearly transparent robots that flap, squeeze and kick when pumped with water could be the next underwater spies, at least when it comes to sneaking up on aquatic life.

In a robotic test, one of these jelly-like machines was quick enough to grab and release a goldfish, a team at the Massachusetts Institute of Technology found.

The researchers, led by engineer Xuanhe Zhao and graduate student Hyunwoo Yuk, created a series of the transparent robots from a rubbery material called hydrogel, including a fin-like bot that can flap back and forth, a "limb" that can kick, and a hand-shaped structure that can squeeze and let go. [Watch the Hydrogel Robots in Action (Video)]

Because the material is composed mostly of water, the resulting robots could also have biomedical applications, the researchers said.

"Hydrogels are soft, wet, biocompatible and can form more friendly interfaces with human organs," Zhao, an associate professor of mechanical engineering and civil and environmental engineering, said in a statement. He added that the group is collaborating with medical scientists to create soft "hands," which could aid in delicately manipulating tissues and organs during surgeries.

For five years, Zhao's team worked to whip up various hydrogel mixes, made from polymers and water, to find one that was tough and stretchable. They also developed processes to attach, or glue, the hydrogels to an array of surfaces, such as glass, metal and rubber.

Zhao noted that others have tried to craft soft robotics from hydrogels, but their materials were brittle and not very flexible, resulting in cracks after repeated use.

When brainstorming ways to create soft robots from their hydrogels, the researchers looked to nature, particularly at glass eels; these tiny, transparent larvae are soft like hydrogels and manage to migrate unscathed over long distances to their riverine habitats. [Photos: Amazing Tech Inspired by the Octopus]

"It is extremely long travel, and there is no means of protection," Yuk said in the statement. "It seems they tried to evolve into a transparent form as an efficient camouflage tactic. And we wanted to achieve a similar level of transparency, force and speed."

So the team got to work. They used 3D printing and laser-cutting techniques to create hollow components of robots. Then, they attached these units to small, rubbery tubes connected to pumps.

Depending on the overall shape of each robot, when water was pumped in, it would quickly produce forceful motions, such as curling up or stretching out.

In one test, Zhao's team pumped water into and out of the "fingers" of a hand-like robot while submerging it in a goldfish tank. The grasper closed delicately around the fish, the researchers said.

"[The robot] is almost transparent, very hard to see," Zhao said in the statement. "When you release the fish, it's quite happy because [the robot] is soft and doesn't damage the fish. Imagine a hard robotic hand would probably squash the fish."

The team is now dreaming up various applications for the hydrogel robots, while also playing around with the hydrogel recipe to customize it for particular uses; a robot used in the medical field, for instance, may not need to be completely transparent, while another application might require a stiffer hydrogel, they said.

"We want to pinpoint a realistic application and optimize the material to achieve something impactful," Yuk said. "To our best knowledge, this is the first demonstration of hydrogel pressure-based actuation. We are now tossing this concept out as an open question, to say, 'Let's play with this.'"

Their research — funded in part by the Office of Naval Research, the MIT Institute for Soldier Nanotechnologies and the National Science Foundation — was published online Feb. 1 in the journal Nature Communications.

Other co-authors of the paper included MIT scientists Shaoting Lin, Chu Ma and Mahdi Takaffoli, as well as Nicholas X. Fang, an associate professor of mechanical engineering at MIT.