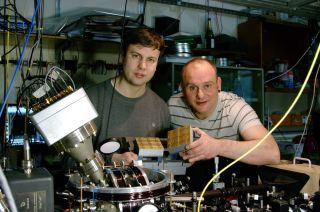 Quantum computers promise the ability to tackle complex problems, such as decoding encrypted communications and developing new pharmaceutical drugs, much faster than conventional machines can. But to date, quantum computers have only been used to tackle specific problems, mostly to demonstrate how they work.

Now, scientists have proposed a new way to build a quantum computer using microwaves to control individual atoms, and they say the new method offers a blueprint for a more useful computing machine.

"We're using some new concepts that tremendously simplify how to build a quantum computer," said Winfried Hensinger, director of the Ion Quantum Technology Group at the University of Sussex in the United Kingdom. Hensinger led the new study that outlines the design. [Top 10 Revolutionary Computers]

The quantum computer would be made up of junctions that control the movement of charged atoms, called ions. As many as 1,296 junctions could be fit onto a conventional 3.5-inch (9 centimeters) silicon wafer, and the wafers could be linked, allowing for a computer with as many quantum bits as needed. By contrast, current quantum computers have, at most, a dozen bits.

Qubits can do this because quantum mechanics allows superposition of states; a particle is never really in one state or another until it is observed, meaning that it has to interact in a measurable way with the outside world. Superposition does not mean that the state is simply unseen; it really can exist as both at once. Because the qubits are in more than one state at once, a quantum computer could effectively tackle many calculations simultaneously.

Superposition, though, is also why quantum computers are hard to build. The ions in their superposed states can't ever touch anything from the outside. Even stray heat can make the ion "collapse" into one state, which takes away the qubits' ability to do all of those calculations, according to the researchers.

In the new architecture, each junction consists of four electrodes that meet like a crossroads. Underneath the electrodes are wires that carry current and create a magnetic field. The magnetic field controls the movement of the "data" ions, which go from the "loading" zone on one electrode to meet another ion in the "entanglement" zone on the opposite electrode, Hensinger said.

Microwaves are beamed at the two ions as they meet, and they are entangled. That means that whatever happens to one ion will be reflected instantly in the second. This is where the 1 or 0 value is encoded, but the value is unknown. Altering the magnetic fields again moves the data ion back to the "crossroads," where it turns to go to a third electrode, called the detection zone. At that point, a laser hits the ion and reveals its state — 1 or 0.

With thousands of these junctions attached to one another, scientists could build a true quantum computer, according to the study. Hensinger and his colleagues envision modules of 2.2 million junctions, about 14 feet (4.3 meters) on a side, attached to one another. A thousand such modules would be the size of a football field and have 2 billion ions, representing about as many qubits, the researchers said.

It's the use of the microwaves and magnetic fields that makes the design easier to scale up, Hensinger told Live Science.

"Traditionally, you use lasers to execute quantum gates," he said. "But to make a computer with lots of qubits, you need a billion laser beams." This was not practical, so his team sought another way.

Other quantum-computer designs trap ions at temperatures close to absolute zero, the coldest temperature theoretically possible (minus 459.67 degrees Fahrenheit or minus 273.15 degrees Celsius). Hensinger said the machine can operate at much higher temperatures, about minus 351 degrees F (minus 213 degrees C), using liquid nitrogen as a coolant.

This type a quantum computer could factor a 617-digit number in 110 days, according to the study. Such large numbers are used in encryption for a lot of communications on the web. (Contrary to popular myth, the quantum computer would not try every single factor; rather, it would find a shortcut that allows an ordinary computer to more easily calculate the factors you want to produce your large number.)

DigiCert, a U.S.-based company that provides digital certificates for common secure communications, says on its website that even 1,000 desktop computers working together would take longer than the age of the universe to match that feat.

Christopher Monroe, a professor of physics at the University of Maryland's Joint Quantum Institute, who has worked on quantum-computing designs, said he likes the ideas laid out for this quantum computer because the modules don't rely on exotic technologies — everything in the paper could be built today. On the other hand, actually building the quantum computer would be a real challenge, he added.

One issue is the sheer size of the machine; the study notes that it would measure more than 300 feet (91 m) on a side if it were to have 2 billion bits.

Even so, Monroe said this study takes a stab at addressing problems that earlier research did not. For example, Hensinger and his team studied the problem of keeping the computer cold enough to operate reliably, because heat can spoil the qubits.

Designs like this one are a move toward real engineering, said Bill Munro, who heads the Theoretical Quantum Physics Research Group at Japanese telecommunications company NTT. Still, some challenges will remain, he said.

"There's a big difference between theory and design and actually building," Munro said. Yet, the simplicity of the design makes it plausible, he added. "The key is not doing a billion [qubits]. You produce one, then 10, or 100. It's kind of something we've been missing."

The new study was published online today (Feb. 1) in the journal Science Advances.