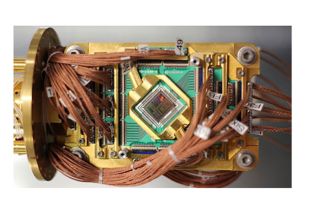 The world's first commercial quantum computer, made by the Canadian company D-Wave Systems Inc., performed no better than a classical computer in a recent analysis.

Quantum computers are thought to be able to solve complex problems thousands of times faster than classical computers, and scientists have been working on developing them for more than a decade. These devices could be useful for modeling quantum mechanics — the realm of physics that describes how matter at the sub-microscopic scale can exist as both a particle and a wave — or for cracking encrypted online information.

A team of researchers compared the performance of a D-Wave Two device to that of a classical computer on a specific set of problems, and failed to find evidence that the quantum computer was faster. [10 Technologies That Will Transform Your Life]

"We do not see any evidence of quantum speedup in the D-Wave device," said Matthias Troyer, a theoretical physicist at ETH Zurich, in Switzerland, and co-author of the study, detailed today (June 19) in the journal Science.

Classical computers perform calculations using bits, whose value can only be 0 or 1. Quantum computers instead use quantum bits, or "qubits," that can exist as a 0 and 1 at the same time. This allows quantum devices to perform multiple calculations at once.

Theoretical physicist Richard Feynman was one of the first to propose the idea of quantum computers in the 1980s, as a way to overcome the limitations of classical computers in simulating quantum systems in physics. Later, mathematician Peter Shor showed that a quantum computer could factor an integer into prime numbers, an ability that could be used to crack encryption algorithms on the Internet.

The company D-Wave, based in Burnaby, Canada, built what it called the first commercial quantum computer in 2011. In 2013, Google and NASA bought one of the company's second-generation devices to use for artificial intelligence research.

Yet, some scientists remain skeptical that the D-Wave devices operate faster than a traditional computer.

Troyer and his colleagues set out to test the 503-qubit D-Wave Two device. They posed a thousand random optimization problems to the machine, and measured how long it took to solve them, compared with a classical PC.

For the problems they tested, the researchers found no evidence of "quantum speedup," or faster performance, on the D-Wave Two.

There could be several explanations for these results, the researchers said. Perhaps, the scientists simply didn't test the machine on the right set of problems.

Colin Williams, a quantum computer scientist and D-Wave's director of business development, told Science Magazine that the problems used in the study were "not at all the right choice for probing a quantum speedup."

Or, it could be that the D-Wave's qubits are not ideal — the device uses qubit technology that is a decade old, so the bits may only stay in position for about 10 nanoseconds (10 billionths of a second), even though it takes 20 microseconds (2,000 times as long) to solve a problem, Troyer said. Another possibility is that the D-Wave may not have been calibrated correctly, he said.

So far, no one has found cases where the D-Wave shows quantum speedup, Troyer said. "The more we look and we don't find it, the more pessimistic I become," he said.