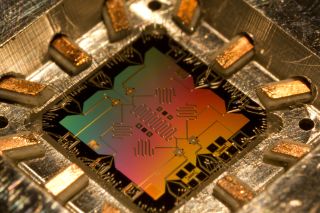 Google's announcement last week that it plans to launch a new quantum computing laboratory with NASA may have boosted a highly specialized and slightly obscure field of study into a more mainstream light. The search-engine giant says quantum technology will help the company build better, more accurate search engines, and will help advance the field of artificial intelligence.

But don't expect your life to change dramatically — at least not yet, experts say.

"It is generally believed that straightforward applications of quantum machines — using them for basic, straightforward computing tasks — is still far away," said Mikhail Lukin, a professor of physics and chairman of the Harvard Quantum Optics Center at Harvard University.

"I think it's a fantastic development that Google is joining this effort," he said. "Quantum technology is probably one of the most exciting areas in the field of physical sciences at the moment."

Wave of the future

Google unveiled its plans this week to collaborate with NASA and the Universities Space Research Association (USRA) to create the Quantum Artificial Intelligence Lab. The facility, located at NASA's Ames Research Center in Moffett Field, Calif., will house a quantum computer made by D-Wave, a small, British Columbia-based company that sells the world's only commercial quantum computers.

"We believe quantum computing may help solve some of the most challenging computer-science problems, particularly in machine learning," Hartmut Neven, Google's director of engineering, wrote on the company's research blog. "Machine learning is all about building better models of the world to make more accurate predictions. If we want to cure diseases, we need better models of how they develop. If we want to create effective environmental policies, we need better models of what's happening to our climate. And if we want to build a more useful search engine, we need to better understand spoken questions and what's on the Web so you get the best answer."

But using quantum computers to build climate models may not be practical quite yet.

"If you think about information gathering and processing in a general sense, we could see some real breakthroughs in 10 years or so," Lukin said. "At the same time, if you ask me whether quantum computers will replace classical computers for climate-change modeling, I say it's unlikely. But we'll have to see."

Quantum computers hold the promise of being able to make complex calculations to specific types of problems much faster than regular computers can now.

Whereas conventional computers can perform tasks extremely quickly already, their circuits abide by the laws of classical physics, meaning they can only be in a single state at any given time. Regular desktop and laptop computers use codes, or bits, expressed as either a 0 or a 1.

Quantum computers, however, are not governed by the same limitations. A quantum bit, or qubit, can exist as a 0, 1, or both a 0 and 1 simultaneously, which is a strange state known as superposition.

"But quantum computing is not just a faster type of conventional computing. It's for specific problems — it's not just taking the computers we have today and making them a billion times faster," said Scott Aaronson, an associate professor in the Computer Science and Artificial Intelligence Laboratory at MIT.

Still, some scientists question whether D-Wave's machines are fast enough, and whether they function as true quantum computers. Aaronson has been a vocal critic of D-Wave, but while he maintains skepticism toward the company's devices, he said there are still myriad benefits to be gained from quantum computing.

One task quantum computing is particularly suited for is solving optimization problems — which is best explained using the example of the traveling salesman who has to visit all of his customers in a certain period of time. Quantum computing could be used to figure out the best route, taking into account a number of different variables, such as traffic.

In some instances, quantum computing could also lead to advancements in the development of superintelligent machines, or artificial intelligence, Aaronson said.

"[To] whatever extent a quantum computer can help you, it can also help with artificial intelligence," he said. "It's not a direct connection, but on the other hand, quantum computing could help with machine learning, which pushes forward the size of the problems you can handle."