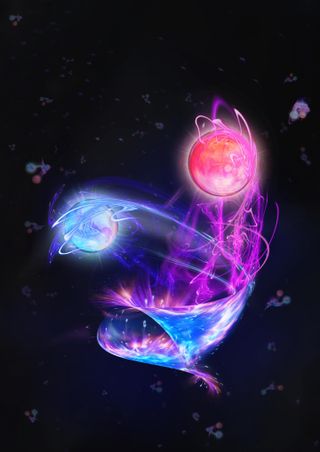 Researchers simulated the creation of elementary particle pairs out of the vacuum by using a quantum computer.
(Image: © IQOQI/Harald Ritsch)

Quantum mechanics suggest that seemingly empty space is actually filled with ghostly particles that are fluctuating in and out of existence. And now, scientists have for the first time made an advanced machine known as a quantum computer simulate these so-called virtual particles.

This research could help shed light on currently hidden aspects of the universe, from the hearts of neutron stars to the very first moments of the universe after the Big Bang, researchers said.

Quantum mechanics suggests that the universe is a fuzzy, surreal place at its smallest levels. For instance, atoms and other particles can exist in states of flux known as superpositions, where they can seemingly each spin in opposite directions simultaneously, and they can also get entangled — meaning they can influence each other instantaneously no matter how far apart they are separated. Quantum mechanics also suggests that pairs of virtual particles, each consisting of a particle and its antiparticle, can wink in and out of seemingly empty vacuum and influence their surroundings. [Beyond Higgs: 5 Elusive Particles That May Lurk in the Universe]

Quantum mechanics underlies the standard model of particle physics, which is currently the best explanation for how all the known elementary particles, such as electrons and protons, behave. However, there are still many open questions regarding the standard model of particle physics, such as whether or not it can help explain cosmic mysteries such as dark matter and dark energy — both of which have not been directly detected by astronomers, but are inferred based on their gravitational effects.

The interactions between elementary particles are often described with what is known as gauge theories. However, the real-time dynamics of particles in gauge theories are extremely difficult for conventional computers to compute, except in the simplest of cases. As a result, scientists have instead turned to experimental devices known as quantum computers.

"Our work is a first step towards developing dedicated tools that can help us to gain a better understanding of the fundamental interactions between the elementary constituents in nature," study co-lead author Christine Muschik told Live Science. Muschik is a theoretical physicist at the Institute for Quantum Optics and Quantum Information of the Austrian Academy of Sciences in Innsbruck, Austria.

Whereas classical computers represent data as ones and zeroes — binary digits known as "bits," symbolized by flicking switch-like transistors either on or off — quantum computers use quantum bits, or qubits, that are in superpositions — meaning that they are on and off at the same time. This enables a qubit to carry out two calculations simultaneously. In principle, quantum computers could work much faster than regular computers at solving certain problems because the quantum machines can analyze every possible solution at once.

"This is one of the most complex experiments that has ever been carried out in a trapped-ion quantum computer," study co-author Rainer Blatt, an experimental physicist at the Institute for Quantum Optics and Quantum Information of the Austrian Academy of Sciences in Innsbruck, Austria, said in a statement.

This work shows that quantum computers can simulate high-energy physics — showing how particles might behave at energy levels that are much too high to be easily generated on Earth. "The field of experimental quantum computing is growing very fast, and many people ask the question, What is a small-scale quantum computer good for?" study co-lead author Esteban Martinez, an experimental physicist at the University of Innsbruck in Austria, told Live Science. "Unlike other applications, you don't need millions of quantum bits to do these simulations — tens might be enough to tackle problems that we cannot yet attack using classical approaches." [Big Bang to Civilization: 10 Amazing Origin Events]

The problem the researchers had their quantum simulator analyze was simple enough for classical computers to compute, which showed that the quantum simulator's results matched predictions with great accuracy. This suggests that quantum simulators could be used on more complex gauge-theory problems in the future, and the machines could even see new phenomena.

"Our proof-of-principle experiment represents a first step toward the long-term goal of developing future generations of quantum simulators that will be able to address questions that cannot be answered otherwise," Muschik said.

"These two approaches complement one another perfectly," study co-author Peter Zoller, a theoretical physicist at the Institute for Quantum Optics and Quantum Information of the Austrian Academy of Sciences in Innsbruck, said in a statement. "We cannot replace the experiments that are done with particle colliders. However, by developing quantum simulators, we may be able to understand these experiments better one day."

"Moreover, we can study new processes by using quantum simulation — for example, in our experiment, we also investigated particle entanglement produced during pair creation, which is not possible in a particle collider," Blatt said in a statement.

The scientists detailed their findings in the June 23 issue of the journal Nature.