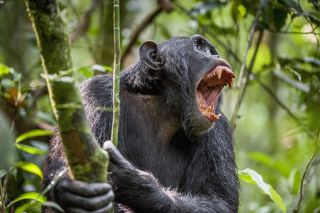 A chimp (not one from the study) shouts in the rainforest.
(Image: © Sergey Uryadnikov/Shutterstock)

A male chimpanzee named Foudouko met a horrific end when members of his former community in the wild in Senegal attacked and killed him, then mutilated and partly cannibalized his body, a new study finds.

It's not uncommon for chimpanzees (Pan troglodytes) to attack and kill chimps in neighboring groups, but it's rare for the primates to kill members of their own community, the researchers said. Even more surprising was the abuse directed toward Foudouko's body after he had been killed, they found.

"It was very difficult and quite gruesome to watch," Jill Pruetz, a professor of anthropology at Iowa State University, said in a statement. "I couldn't initially make sense of what was happening, and I didn't expect them to be so aggressive with the body." [8 Human-Like Behaviors of Primates]

Pruetz and her colleagues have followed the chimp group, called the Fongoli community, in southeastern Senegal since 2001. Over the years, the community has included up to 35 chimps at one time, but one chimp, Foudouko, caught their attention early on, the researchers said.

Foudouko was the community's alpha male from either 2004 or 2005 until 2008, when he disappeared and was seen living alone on the outskirts of the community, Pruetz said. Foudouko reappeared in 2013, and was immediately killed by his former community members, Pruetz said.

Pruetz and her colleagues didn't see the killing, which happened at night, but they could hear it from their camp, she said. The next day, they filmed the chimps interacting with Foudouko's body. That footage shows the chimps abusing and cannibalizing the body for nearly 4 hours, she said.

The younger adult males and one adult female showed the most aggression toward Foudouko's body, Pruetz found. Only two male chimps — both former allies of Foudouko — didn't show aggression toward the body. One of the two did yell and hit the body, but it appeared to be an effort to awaken him, Pruetz said. [Image Gallery: Lethal Aggression in Wild Chimpanzees]

Pruetz noted that it's extraordinary Foudouko managed to survive in isolation for five years. There's no other record of a chimp surviving that long by itself, she said. During his exile, Foudouko followed the community from a distance and interacted with former allies, but these interactions were rare and always done in private, the researchers said.

"It really struck us that Foudouko lived on the outskirts for so long," Pruetz said. "Chimps are very social, so this type of isolation would be a huge stress, and it seemed Foudouko wanted to get back into the social group."

Perhaps Foudouko would have fared better if he had acted more submissive during his return in 2013, Pruetz said. During his time as an alpha male, Foudouko was very dominant and was feared by the other chimps. It's feasible that the younger chimps attacked him because they didn't want him to regain power, she said.

Moreover, the younger chimps outnumbered Foudouko and his allies. They were also in their physical prime, which may have given them an advantage during the attack, she said.

In the hours after the attack, the chimps appeared afraid of Foudouko's body even as they attacked it, Pruetz said. After the chimps left the body, Pruetz and her team buried the fallen chimp, but plan to exhume his remains for further examination, she said. [Top 10 Weird Ways We Deal With the Dead]

Chimps aren't always aggressive — studies show that they can exhibit selfless behaviors and even understand and mourn death — but they do have a capacity for lethal aggression. For instance, a 2014 study in the journal Nature suggested that chimps are naturally violent, Live Science previously reported.

In addition, bonobos (Pan paniscus), sometimes called pygmy chimpanzees, have been recorded attacking each other, but to a much lesser degree than chimps do, according to the 2014 study, which Pruetz co-authored.

However, these violent behaviors aren't isolated events, Pruetz said. It's likely that human-made environmental changes contribute to the primates' aggressive behaviors, she said.

There were many factors at play in Foudouko's death, she said. For example, the Fongoli community has more males than females, as well as many young males vying for power, Pruetz said.

It's possible that the skewed gender balance is linked to human encroachment, she said. There are reports that local people were hunting female chimps to get their infants for the pet trade, Pruetz said. Chimps have slow life cycles — females don't reproduce until they're about 13 years old and have a gestation period between 6 and 8 months — so even a few missing females would have a large impact on the community, she said.

Chimpanzees are endangered worldwide, and the subgroup that Pruetz studied (Pan troglodytes verus) is critically endangered, according to the International Union for Conservation of Nature. It's important to understand their behaviors so humans can help ensure their survival, Pruetz said.

The study was published online Jan. 23 in the International Journal of Primatology.