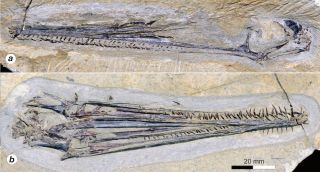 During the dinosaur era, pterosaurs would swoop down and snap up wriggly fish and buzzing insects with their spiky teeth, with the exception of one odd group — pterosaurs that ate their meals like modern-day flamingos do: by filter feeding.

Now, researchers have found the earliest filter-feeding pterosaur on record. The specimen, which was discovered in northeast China's Liaoning province, is 160 million years old, and dates to the Jurassic period (199.6 million to 145.5 million years ago), according to a new study.

"The fossil specimen represents a medium-sized pterosaur with a large number of fine teeth indicative of filter-feeding adaptation," said the study's co-researcher Ke-Qin Gao, a professor at the School of Earth and Space Sciences at Peking University in China. [Photos of Pterosaurs: Flight in the Age of Dinosaurs]

Researchers named the newly identified pterosaur Liaodactylus primus — honoring the Liaoning province by combining it with the suffix "dactylos," the Greek word for "finger," or "winged finger," which is commonly used for pterosaur names. The species name "primus" is Latin for "first," an indication of the pterosaur's early age in the pterodactyloid group, the researchers said.

The pterosaur's jaw was almost 50 percent of its roughly 5-inch-long (13.3 centimeter) skull, the researchers said. Its wingspan was likely about 3.2 feet (1 meter), or slightly smaller than the wingspan of a great horned owl (Bubo virginianus), Gao said.

Despite its small size, L. primus is a big finding, because it helps researchers learn more about when filter-feeding pterosaurs developed, Gao said.

"The new pterosaur marks a major ecological transition in pterosaur evolution from fish-catching or insect-eating to filter-feeding adaptation," Gao told Live Science in an email. "This critical transition was followed by a burst of ecological diversification of pterosaurs, which had a significant impact on the change of the terrestrial ecosystems of the Cretaceous world."

Although pterosaurs lived during the dinosaur age, known as the Mesozoic era, they were not dinosaurs themselves. Rather, pterosaurs were flying reptiles — the first flying vertebrates on record, the researchers said.

Pterosaurs initially appeared about 215 million years ago during the Triassic period, and went extinct when a 6-mile-wide (10 kilometer) asteroid slammed into Earth about 65 million years ago, ending the Cretaceous period. The first known pterosaur was discovered in the 1760s in Germany, and now there are more than 110 pterosaur species known worldwide, the researchers wrote in the study, including a pterosaur with 110 teeth that was unearthed in Utah and a cat-size pterosaur discovered in British Columbia, Canada.

All of these pterosaurs ate a variety of different meals. During the Cretaceous, pterosaurs "engaged in a variety of feeding adaptations, including filter-feeding, fish-eating, carnivory and scavenging, herbivory including frugivory, mollusk shell-crushing and omnivory," the researchers wrote in the study.