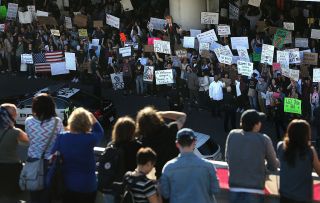 A controversial executive order enacted by President Donald Trump over the weekend immediately barred some refugees and immigrants from entering the United States, triggering confusion and outrage across the country, including from within the scientific community.

Over the weekend, travelers from these countries were detained at airports across the country, prompting thousands of protesters to gather outside airports to voice their disapproval of the ban. [10 Historically Significant Political Protests]

Since the executive order was signed, many members of the STEM (science, technology, engineering and math) community have voiced their concern over the ban, which could restrict international research collaborations and attendance at major science conferences in the U.S. The following is a collection of official statements and social media posts from science and technology leaders:

Elon Musk, CEO of Tesla and SpaceX, asked his followers on Twitter for specific amendments to the executive order that he will present to Trump.

Sundar Pichai, CEO of Google, responded to the ban in a memo to the company's staff, as reported by Bloomberg. Pichai said that more than 100 staff members at the company are affected by the order, and the CEO recalled staff to the U.S. after the order was signed.

"It’s painful to see the personal cost of this executive order on our colleagues," Pichai wrote in the memo, a copy of which was obtained by Bloomberg. "We’ve always made our view on immigration issues known publicly and will continue to do so."

Microsoft CEO Satya Nadella, who was born in India and moved to the U.S. to study computer science, wrote in a post on LinkedIn that the tech company supports broader immigration opportunities.

"As an immigrant and as a CEO, I’ve both experienced and seen the positive impact that immigration has on our company, for the country, and for the world," Nadella said. "We will continue to advocate on this important topic."

Another Silicon Valley company made waves with its response to the ban, causing the hashtag #DeleteUber to trend on Twitter. In a show of support for the protesters gathered at airports, the New York Taxi Workers Alliance called for drivers to avoid John F. Kennedy International Airport between 6 p.m. and 7 p.m. ET on Saturday (Jan. 28). However, Uber took a different approach and announced that it was lowering prices — by eliminating "surge pricing" on rides — around JFK Airport. People on social media took the app's surge-pricing announcement either as an act of support for the executive order, or as an attempt to profit from it. In response, #DeleteUber became popular on Twitter, with users sharing screenshots of them deleting the app from their phones.

In contrast, Uber's ride-share competitor Lyft pledged to donate $1 million to the American Civil Liberties Union, a civil rights group that is fighting the ban in court.

Scientists have already begun to organize against the immigration policy. A petition denouncing the order was signed by more than 12,000 researchers — including 44 Nobel laureates.

Ken Kimmell, president of the Union of Concerned Scientists, said in a statement that the executive order's targeting of Muslims and refugees is "un-American and inhumane."

"America's economy and particularly our scientific enterprise has always benefited from the contributions of immigrants and refugees," Kimmell said. "Turning our back on those in need doesn't just violate our values as Americans — it leaves our country worse off."

A spokesperson for the American Association for the Advancement of Science (AAAS) also spoke out against the ban. AAAS CEO Rush Holt said in a statement that it is necessary to allow scientists and students from around the globe into the U.S.

"Scientific progress depends on openness, transparency, and the free flow of ideas," Holt said. "The United States has always attracted and benefited from international scientific talent because of these principles."

Universities across the U.S. have also called on the administration to end the ban. In a statement, Mary Sue Coleman, president of the Association of American Universities, said that the executive order is already causing damage, stranding students who have been approved to study in the U.S. (Initially the ban also applied to people with valid visas or green cards, but a federal judge in New York ruled that citizens of the seven countries who hold valid visas and have already arrived in the U.S. cannot be removed from the country.)

"It is vital to our economy and the national interest that we continue to attract the best students, scientists, engineers, and scholars," Coleman said.

Individual scientists have also spoken out against the ban, with some announcing that they won’t be attending conferences because the executive order bans colleagues. For instance, Anna Watts, a professor of astrophysics at the University of Amsterdam, tweeted that she declined an invitation to help organize a meeting in the U.S. because of the ban.

Similarly, Megan MacKenzie, a professor of international relations at the University of Sydney, asked on Twitter if traveling to the U.S. for a conference is ethical when it can no longer be inclusive.