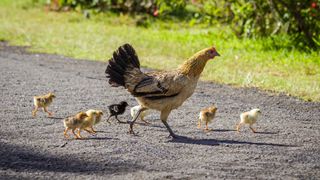 According to the Chinese Zodiac, 2017 is the year of the rooster, an animal that signifies hard work, diligence, and confidence, among other things. But in the wild, do roosters exude these qualities when looking for love?

The chickens found in coops and farms throughout the world were domesticated thousands of years ago from the red junglefowl, a tropical bird found in various parts of Asia, with some hybridization (crossbreeding) with some closely related species, particularly the gray junglefowl. Though chickens are considered a subspecies of the red junglefowl and the two animals look similar, they have quite different social and reproductive behaviors.

On the Island of Kauai in Hawaii, however, live thousands of feral chickens — once-domesticated birds that have reverted to a wild state — that provide a unique look into how domestic animals and their genes respond to the natural environment. Recent research shows that these birds are hybrids of the red junglefowl-like chickens that Polynesians brought to Hawaii and the more modern domesticated chickens introduced to Hawaii by European and U.S. settlers. It's thought that hurricanes that hit the island in 1982 and 1992 released chickens from people's backyards and into the forests, where they met and bred with the remnants of the Polynesian junglefowls (Kauai lacks imported predators like mongooses, which wiped out the ancient birds from the other Hawaiian Islands).

"The feral chickens on Kauai, based on casual observations, behaviorally span a continuum from chicken-like to the more classic red junglefowl," said Eben Gering, an evolutionary ecologist at Michigan State University, who is studying Kauai's wild chickens.

In their native forests, red junglefowl roosters live in set home ranges that they protect from other junglefowls. These males will typically have multiple females they watch over, as well as sometimes one or two subordinate males. The forests and undeveloped areas of Kauai reveal a similar social structure, with small groups consisting of one or two males and a few females.

But like their domestic cousins, the chickens in more urbanized areas of Kauai appear to be far more tolerant of other chickens (though they do occasionally show aggression to each other). These chickens come out in huge mobs whenever food is available, such as if someone throws leftovers on the ground. "It's hard to impress how many chickens can appear from nowhere," Gering told Live Science.

Red junglefowls are strongly seasonal breeders; domestic chickens, on the other hand, mate and lay eggs year-round. Kauai's chickens appear to follow a mixed breeding pattern — while they do breed throughout the year, their breeding behaviors have seasonal peaks. Over time, Gering said, the feral chickens may eventually adopt a more red junglefowl-like breeding behavior, as they divert their energetic investments from rapid growth and reproduction to improved immunity and physiology (traits that would allow them to better survive in the wild).

Gering and his research colleagues haven't studied the feral chicken's courtship and mating behaviors in-depth, but they have made some observations.

"We do see the same behaviors that poultry farmers see in their flocks," Gering said, adding that males have ritualized displays and behaviors that are involved with mate attraction and monopolization.

A show of bravado

One common courtship behavior is called "tidbitting," in which a male will pick up and drop a piece of food (or pretend he has a piece of food) to get the interest of a female, while also making "cute" sounds, Gering said. The male may also do a "waltz" — he'll perform a kind of back-and-forth strut while tapping one wing against the ground.

A wing-flapping display — wherein the male plucks at his neck feathers to improve appearance, and then leans back, puffs up his wings, and crows — may follow, though males often use this smooth move immediately after mating. Females are able to eject spermthat they're not excited about (such as sperm from subordinate males), so the wing-flapping display may help convince her to keep her mate's sperm or reject mating attempts from other males.

It's unclear which qualities feral females favor most in their mates, but Gering is hoping to study this soon. In both domesticated chickens and red junglefowls, at least, females pay close attention to males' eye color, neck wattle, body size, and most importantly, comb size and brightness.

Compared with all of the strutting, tidbitting, crowing and bravado, copulation in the feral chickens is a rather unexciting event. The male will simply climb onto the female's back while she crouches down, grab at the back of her neck to help him hold on, and align his cloaca (waste and reproductive orifice) with hers to pass on his sperm. "And it lasts all of two seconds," Gering said. Females, seemingly unfazed by the event, will go right back to eating afterward.

Interestingly, many modern breeds of domesticated chickens, unlike their wild ancestors, don't brood, or sit on the eggs to incubate and protect them. But the Kauai population has reclaimed this act, helping their eggs better survive in the wild, and Gering's research suggests the behavior is tied to the expression of certain red junglefowl genes.