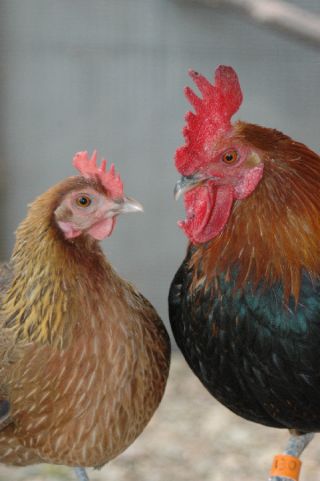 Rather than fight off undesirable suitors, hens have subtler way to reject them: They can eject the low-status roosters' sperm.
(Image: © Rebecca Dean)

Chickens have their own battle of the sexes, and scientists have discovered a secret strategy used by hens to control who fertilizes their eggs: After mating, hens can eject the sperm of less desirable, low-status roosters.

A new study has shown that, during an average ejection, a hen jettisons 80 percent of the sperm a rooster deposits in her reproductive tract. This has a huge impact on the competition among males fighting to father her future chicks, according to study researcher Tommaso Pizzari, an evolutionary biologist and university lecturer at Oxford University in the United Kingdom.

"It is beginning to appear females can play a much more subtle, but powerful role in the battle for fertilization," Pizzari told LiveScience.com.

A few things to know about chicken sex: Both sexes are promiscuous, mating with multiple partners. Hens, however, often don't have a choice in mates. They prefer males at the top of the pecking order, but other roosters with lower status will force the hens — about half their size — to mate. Rather than attempt to fight off the undesirable mates, hens appear to have developed a more subtle way to reject them.

Scientists already knew that hens could eject sperm, but in the recent study, they set out to find evidence that hens were actively using this technique to control fertilization.

Using chickens from a flock that lived in a semi-feral setting, similar to their wild ancestors, the red jungle fowl, Pizzari and other scientists led by Rebecca Dean who conducted the study while at Oxford and is now at University of Uppsala in Sweden mated hens with various roosters; the scientists ranked roosters' social status from 1 to 6, with 1 being the most dominant. They then videotaped any sperm ejection that followed the mating and collected the results. To determine how this compared with the total sperm the roosters had deposited, the researchers captured all of their semen during another set of controlled mating attempts.

Their results confirmed that sperm from the least desirable, low-status roosters suffered the most for several reasons.

When mating with a series of roosters, hens ejected more semen from the later mates. Since lower-status roosters don't get the first shot at the hens, for this reason alone, their sperm are more likely to be ejected, Pizzari explained. But even controlling for mating order, status had a strong effect on whose sperm the hens kept. In addition, lower status roosters were more likely to ejaculate more semen in one shot, and the team found that hens were more likely to eject larger ejaculations. [Longest Known Sperm Create Paradox of Nature]

"It is likely in more natural situations, subdominant males are disadvantaged in many ways," Pizzari said.

The study appears in the September 2011 issue of the journal The American Naturalist.