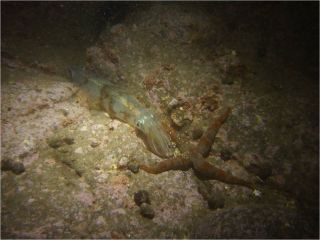 Having larger sperm may be the result of how the smaller Loligo bleekeri squid fertilize the female's eggs. (Shown here, the squid species at a spawning ground.)
(Image: © Yoko Iwata)

Among one species of squid, large males produce small sperm, meanwhile, small male squid have bigger swimmers. The differing sperm sizes are most likely the result of the two distinct strategies these males employ to mate with females, according to researchers.

Large male squid, of the species Loligo bleekeri, called consort males, compete directly with other males. They court females by changing color and, when successful, they place a packet of sperm inside the female's oviduct, an internal tube through which her eggs must pass. The consort males — which are larger than females and have an average length of 10 inches (27 centimeters) — guard the female to keep other males' sperm away from her eggs when she lays them. [See pictures of Loligo squid]

The competition doesn’t always fight fair. Small male squid, called sneaker males, do not court females and rarely compete directly with other males; instead they dart into an established pair, and deposit their packets of sperm on her body, near her sperm storage organ (located below her mouth), in the hopes of getting a shot at her eggs. Sneaker males are smaller than females, with an average length of 7 in. (18 cm).

To get insight as to why males of the same species might produce different-sized sperm, researchers led by Yoko Iwata from the University of Tokyo collected and measured sperm from both types of males. Size is relative; they found that the sneaker males' sperm averaged 99 micrometers long, while the consort males averaged 73 micrometers. (For comparison, the period at the end of this sentence is about 500 micrometers.)

Fertilization experiments indicated that both types of sperm were capable of fertilizing eggs, and both swam at the same speed.

The authors conclude that the difference in sperm probably arises from where the sperm are deposited to do their duty.

"Aside from the obvious factor of water movement (risk of sperm dilution), there may be many differences between external and internal fertilization environments ... that may affect fertilization success by different-sized sperm," Iwata told LiveScience.

Although the consort males are generally more successful, fathering more offspring, the smaller males' sneaky strategy gives them a chance they wouldn't otherwise have, according to the researchers.