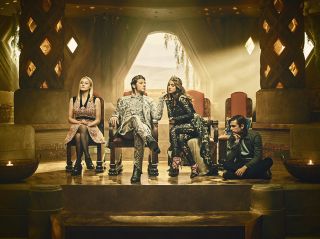 An interactive exhibit allows fans of Syfy's "The Magicians" to "do some goddamn magic!"
(Image: © Jason Bell/SyFy)

NEW YORK — In the magical world of the Syfy TV series "The Magicians," millennial mages-in-training hone their craft and confront deadly mystical peril at a secret school — Brakebills University — which is hidden from non-magicians' eyes.

But here in Williamsburg, Brooklyn, visitors can try their hand at performing magical illusions in the interactive exhibit "Hall of Magic," which opened Jan. 20 and runs until Sunday (Jan. 29).

Installations in an array of rooms recreate the otherworldly atmosphere of the TV show, and allow visitors to sample experiences that mimic magical powers — pulling sounds out of books, shaping the flow of constellations on a starry ceiling, and commanding objects with a single gesture. [Enter Syfy's World of 'The Magicians' at Interactive NYC Exhibit | Video]

Throughout history, people have been fascinated by the idea of magic, sometimes ascribing religious figures with extraordinary otherworldly abilities, such as teleportation, banishing demons and turning metals into gold.

However, not all magical ability was perceived as holy or benevolent — so-called "witches" were widely persecuted across Europe and in the American colonies from the 15th through the early 18th centuries. The victims of these witch hunts were accused of casting spells that controlled weather, spread illness, or transformed them into animals.

Today, television programs such as "The Magicians" integrate magical practice with a modern perspective — in this case, a decadent college environment that includes drinking, smoking and plenty of sex alongside the unraveling of arcane mysteries. And in the Hall of Magic, a series of rooms invites the curious to immerse themselves in some of the series' fantastic scenes, where interactives offer a glimpse of what possessing magical abilities might be like.

Rooms are arranged along a looping corridor, each with a different experience inside. Visitors can browse a floating library, take a seat at a forest picnic with dancing plates, attempt to levitate, sample herbal blends with an apprentice apothecary, or try to move a ball using only their thoughts.

"The scenic direction in many of these rooms is taken directly from still frames from the show," Eric Fleming, co-founder and executive producer at Mash Studio, which created the Hall of Magic experience, told Live Science in an email.

"We aimed to strike the right balance, depicting the overall Hall as if it could be a hallway at a real life Brakebills University. We go through great lengths to disguise the tech as much as possible so guests get a true sense that what they're interacting with is 'alive' in some relatable way," Fleming said.

The real magic takes place behind the scenes, where hidden sensors track user movements and software translates them into feats that seem to bend the rules of reality, Matt Felsen, creative technical director for the Hall of Magic installations, told Live Science. [Supernatural Powers? Tales of 10 Historical Predictions]

In the "Battle Magic" room, a wave of the arm makes picture frames tilt, turns lamps on and off, and sets turntables and snow globes spinning. To make that happen, interactive designers installed sensors in the room to detect arm gestures, and built a computer model in 3D space that contained all of the room's movable objects. Then, they used custom software to convert gestures into data that triggered mechanical responses in the objects, Felsen said.

In a darkened room nearby, visitors can lie on the floor and see their body movements recreated in a ceiling projection of constellations. Designers used infrared sensors to gather data about depth so they could create 3D volumes of people, which they used to drive the graphics of bodies forming constellations in the sky, "sort of like snow angels, but star angels," Felsen said.

A large bookshelf in another room behaves like a giant 3D touch screen, holding books that respond to touch with sound.

"It's like a picture frame that's hollow in the center, with infrared sensors around it," Felsen said. "The entire front plane is an invisible touch screen — as a finger crosses the beam, we detect that. We created a map of the shelf so we can define regions that correspond to physical books, and we use that to trigger different notes and different samples."

Visitors can even stage a "magical" duel to see who can be the first to push a ball into their opponent's goal — without using their hands. Special headsets detect certain types of low-frequency brain waves that are produced when the brain is calm and focused, and the electrical signals nudge a magnet under that table surface that carries the ball. As the ball moves across the table, a row of illuminated beakers light up and change color, adding an atmospheric touch, Felsen said.

The Hall of Magic at the William Vale Hotel in Brooklyn is open to the public through Sunday. Season 2 of "The Magicians" premiered Jan. 25 at 9/8c on Syfy (check local listings).