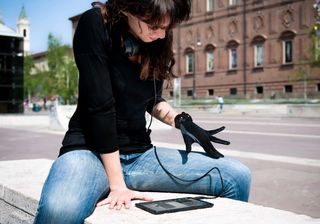 The Remidi T8 glove senses the force of tapping motions to create beats on the go.
(Image: © Remidi)

If you find yourself tapping your hand to a beat while sitting at your desk, in the car or on a park bench, a high-tech glove might be just the gadget to help you turn the tunes in your head into music you can record.

The glove, called the Remidi T8 wearable instrument, is loaded with pressure-sensitive sensors along the fingertips and palm. Its wristband controls how the combination of sounds from each sensor are translated as a user moves his or her hand, according to a post on Kickstarter announcing a project to produce the glove, which is not yet available.

The glove aims to be a very intuitive device for music artists, enthusiasts and disc jockeys to use, according to the company. [Gallery: Futuristic 'Smart Textiles' Merge Fashion with Tech]

Users of the glove will be able to compose music, play and perform on the go, said Mark DeMay, co-founder and chief technology officer at Remidi. It can be thought of as a wearable MIDI controller, DeMay said, referring to the music synthesizers found in recording studios that let producers combine tracks, tweak vocals and adjust tempos.

But the glove is actually much more adaptable than the large synthesizer machines, and can be personalized to create new, custom sounds or remix existing ones, depending on how a user programs it.

"We wanted to give people a fun way to express themselves and start pushing the boundaries of what we can do with musical instruments," DeMay told Live Science.

The idea for the wearable music instrument was born when Remidi founder and CEO, Andrea Baldereschi, and DeMay met while working at Livid Instruments, an Austin, Texas-based company that designs MIDI controllers and mixers for DJs. Baldereschi had been a DJ for a number of years and would always tap out new beats whenever they were working together, DeMay said.

But he often forgot the new melodies before he could get around to recording the music, so Baldereschi decided he wanted to invent a way to record riffs on the go, without being limited to working in rooms with bulky, burdensome digital music systems.

"The digital world has gotten a little bit stagnant in terms of the MIDI controllers," DeMay said. "They all kind of do the same stuff, in the same way. They're all buttons, knobs, LEDs and faders, just in a different arrangement," he said. "The T8 glove is something truly different."

With the T8, a user could start jamming on any surface — a desk, wall, subway seat, park bench, car window, or on their own body. The data from the glove can then be sent to the Remidi app or to other recording software, DeMay said.

The T8 creates different sound intensities and rhythms based on which of its eight sensors you press, what combinations you press, and how long or how hard you press down on each point. And a tiny spinning gyroscope and accelerometer in the glove's wristband measures how fast your hand moves up and down or left and right, and adjusts the tone and tempo of the music you create in real-time.

"The glove's really adaptable as far as what is does," DeMay said. A prototype of the glove won a number of awards for its features and design, including the Marzotto CLN Corporate Price in Milan, and the Jury's Special Prize at the Wearable 2016 Awards in Paris.

Remidi's Kickstarter campaign raised more than $130,000 — nearly triple its original goal of $50,000. People can purchase a T8 for $349 through the company's pre-sale until September, DeMay said. After that, Remidi plans to sell the T8 for $399.