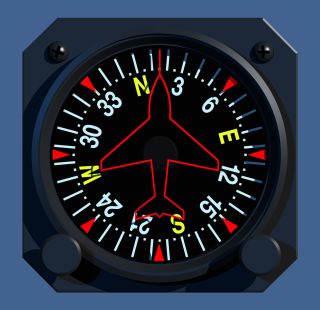 An altimeter uses a gyroscope to determine altitude and position of the aircraft.
(Image: © Jan Kaliciak | Shutterstock)

Many different sensory devices are used to determine the position and orientation of an object. The most common of these sensors are the gyroscope and the accelerometer. Though similar in purpose, they measure different things. When combined into a single device, they can create a very powerful array of information.

What is a gyroscope?

A gyroscope is a device that uses Earth's gravity to help determine orientation. Its design consists of a freely-rotating disk called a rotor, mounted onto a spinning axis in the center of a larger and more stable wheel. As the axis turns, the rotor remains stationary to indicate the central gravitational pull, and thus which way is "down."

"One typical type of gyroscope is made by suspending a relatively massive rotor inside three rings called gimbals," according to a study guide by Georgia State University. "Mounting each of these rotors on high quality bearing surfaces insures that very little torque can be exerted on the inside rotor."

Gyroscopes were first invented and named in the 19th century by French physicist Jean-Bernard-Léon Foucault. It wasn't until 1908 that German inventor H. Anschütz-Kaempfe developed the first workable gyrocompass, according to Encyclopedia Britannica. It was created to be used in a submersible. Then, in 1909, it was used to create the first auto-pilot.

What is an accelerometer?

An accelerometer is a compact device designed to measure non-gravitational acceleration. When the object it's integrated into goes from a standstill to any velocity, the accelerometer is designed to respond to the vibrations associated with such movement. It uses microscopic crystals that go under stress when vibrations occur, and from that stress a voltage is generated to create a reading on any acceleration. Accelerometers are important components to devices that track fitness and other measurements in the quantified self-movement.

The first accelerometer was called the Atwood machine and was invented by the English physicist George Atwood in 1783, according to the book "Practical MEMS," by Ville Kaajakari.

Uses of a gyroscope or accelerometer

The main difference between the two devices is simple: one can sense rotation, whereas the other cannot. In a way, the accelerometer can gauge the orientation of a stationary item with relation to Earth's surface. When accelerating in a particular direction, the accelerometer is unable to distinguish between that and the acceleration provided through Earth's gravitational pull. If you were to consider this handicap when used in an aircraft, the accelerometer quickly loses much of its appeal.

The gyroscope maintains its level of effectiveness by being able to measure the rate of rotation around a particular axis. When gauging the rate of rotation around the roll axis of an aircraft, it identifies an actual value until the object stabilizes out. Using the key principles of angular momentum, the gyroscope helps indicate orientation. In comparison, the accelerometer measures linear acceleration based on vibration.

The typical two-axis accelerometer gives users a direction of gravity in an aircraft, smartphone, car or other device. In comparison, a gyroscope is intended to determine an angular position based on the principle of rigidity of space. The applications of each device vary quite drastically despite their similar purpose. A gyroscope, for example, is used in navigation on unmanned aerial vehicles, compasses and large boats, ultimately assisting with stability in navigation. Accelerometers are equally widespread in use and can be found in engineering, machinery, hardware monitoring, building and structural monitoring, navigation, transport and even consumer electronics.

The appearance of the accelerometer in the consumer electronics market, with the introduction of such widespread devices like the iPhone using it for the built-in compass app, has facilitated its overall popularity in all avenues of software. Determining screen orientation, acting as a compass and undoing actions by simply shaking the smartphone are a few basic functions that rely on the presence of an accelerometer. In recent years, its application among consumer electronics extends now to personal laptops.

Accelerometers instead find use in a variety of consumer electronic items. For example, among the first smartphones to make use of it was Apple's iPhone 3GS with the introduction of such features as the compass app and shake to undo, according to Wired.

A gyroscope would be used in an aircraft to help in indicating the rate of rotation around the aircraft roll axis. As an aircraft rolls, the gyroscope will measure non-zero values until the platform levels out, whereupon it would read a zero value to indicate the direction of "down." The best example of reading a gyroscope is that of the altitude indicator on typical aircrafts. It is represented by a circular display with the screen divided in half, the top half being blue in color to indicate sky, and the bottom being red to indicate ground. As an aircraft banks for a turn, the orientation of the display will shift with the bank to account for the actual direction of the ground.

The intended use of each device ultimately influences their practicality in each platform used. Many devices benefit from the presence of both sensors, though many rely on the use of but one. Depending on the type of information you need to collect — acceleration or orientation — each device will provide different results.