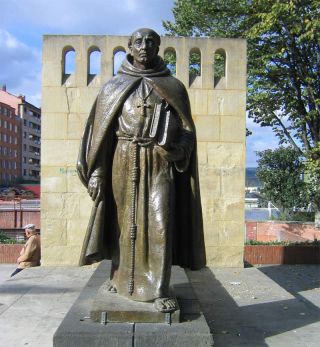 The man who prosecuted Calderon was Fray Juan de Zumarraga (his statue is shown here), the archbishop of Mexico and Apostolic Inquisitor of New Spain. For reasons unknown he gave Calderon a light sentence, prohibiting him from saying mass for two years and exiling him back to Spain.
(Image: © Image of the statue from Durango Mexico is courtesy Wikimedia, released into public domain.)

On Jan. 30, 1540, in Mexico City, at a time when Spain was carving out an empire in the New World, an epic trial got under way.

An ordained Catholic priest named Pedro Ruiz Calderón was being prosecuted for practicing black magic. The priest actually bragged about the powers he had acquired according to records a researcher is working on publishing.

He claimed to be able to teleport between continents, make himself invisible, make women fall in love with him, predict the future, turn metals into gold, summon and exorcise demons and, most importantly, discover buried treasure.

"He really typifies all of the major types of learned magic, from summoning and conjuring demons, to exorcising demons to the powers of cloaking himself, making himself invisible," said John Chuchiak IV, a professor at Missouri State University who translates and publishes documents recording the opening of the trial in his new book "The Inquisition in New Spain 1536-1820"(John Hopkins University Press, 2012). [See Photos of the Trial Records]

"He could hypnotize people, too; it's one of the earliest, I think, descriptions of hypnotism, mesmerizing people."

At the start of the trial, Calderón was denounced in a speech by Miguel López de Legazpi, the Secretary of the Holy Office, who would later become a conquistador in the Philippines. In translation, the trial records state that "many persons have made it known before him [Legazpi] that the said Calderón knows of the Black Arts and that he learned them from others." The records go on to claim that Calderón is able to make himself invisible and can travel across great distances in a short amount of time. "It's just fascinating. The story just goes on and on," Chuchiak told LiveScience of the more than 100 pages of trial records.

The prosecutor Fray Juan de Zumárraga, the Franciscan archbishop of Mexico and apostolic inquisitor of New Spain, was known for his extreme punishments. "Other people he had their tongue split for very minor blasphemy," said Chuchiak. In the end, for reasons unknown, the bishop gave Calderón only a minor punishment — exile back to Spain and a prohibition from giving Catholic services for two years; Zumárraga may have wanted to get rid of him without publicly executing a priest. What happens to Calderón after he is exiled is not known.

According to the trial records, Calderón claimed that he went to hell itself to acquire some of his abilities. At one point, the records say he was in Naples, working for a viceroy.

"He and three men went to explore a cave. He said it was 3,000 leagues below the surface of the Earth," said Chuchiak, summarizing the Spanish language account. Apparently, the men got stuck there, with most of Calderón's companions dying.

"He actually descended to the depths of hell, he said, and there he learned the secrets of the science of the black arts and alchemy." [Time Travel & Reincarnation: 10 Tales of Superhuman Abilities]

"He brought back books from hell. He said one of them had the signature of the devil, the prince of darkness."

When Calderón was arrested, his library was seized. None of the books contained the signature of the devil; however, some intriguing books were found, including Albertus Magnus' "Secrets,"a manual on how to conduct exorcisms, and a book by Dr. Arnaldo de Villanueva called the "Treasure of Treasures,"in which it describes techniques to find buried treasures. The library also held "archival letters written in some mysterious writing, a certain cipher that he claimed that he could read," Chuchiak said. "No one else could read it."

Why did he do it?

Why a priest like Calderón may have strayed so far off may be due to two rather earthly things — bragging rights and financial gain.

Chuchiak notes that Calderón loved to brag. After the trial was over, he caught pneumonia, was sent to the infirmary, and while there, "he was bragging about his ability to cloak himself and to win over almost any woman that he could," he said, again summarizing the Spanish account. In other instances, "he talks about all the women that he slept with. He talks about how he's able to get away with having mistresses and sneaking in an out of their bedrooms," his supposed invisibility powers helping with this.

There is also evidence that he profited from his abilities. Records indicate that, superpowers or not, he often found buried treasure.

According to the translated trial record, Gil González de Benavides, a conquistador, testified that "he had witnessed that the said Calderón had discovered the whereabouts of several baskets filled with golden ornaments and items that the natives had hidden from the Spaniards." "Apparently, he got lucky and did find treasures, that made his fame wider," said Chuchiak. "People came to him and asked him for help finding lost things, lost people, lost treasures," services for which Calderón was paid.

His superpowers were, of course, false, said Chuchiak; if Calderón could have made himself invisible or teleported between continents, he could have escaped his trial. That, Chuchiak added, is always the problem with people who claim they could perform black magic.

"They [the inquisitors] always challenge them to practice their black art. But they didn't do it, they couldn't do it," said Chuchiak. In the end, Calderón was just a man who had made great claims and was now facing trial. "Obviously he's just boasting," Chuchiak said.