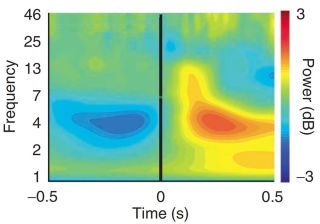 As in rats, low-frequency brainwaves in the human medial frontal cortex change from low-power (blue) to high-power (red-orange) after the recognition of a mistake.
(Image: © Frank Lab/Brown University)

When it comes to learning from mistakes, humans and rats think alike, research suggests.

In a study that tracked how humans and their rodent cousins adapted to errors during a time estimation task, the two species showed similar brain activity in the medial frontal cortex (MFC), which sends signals that synchronize neurons in the part of the brain that controls movement.

The findings suggest rats could serve as models for studying human adaptive control, the process of modifying choices based on experience. This knowledge could be useful in treating psychiatric diseases, such as obsessive compulsive disorder, depression and schizophrenia, the researchers say. [Top 10 Controversial Psychiatric Disorders]

"With this rat model of adaptive control, we are now able to examine if novel drugs or other treatment procedures boost the integrity of this system," study researcher James Cavanagh, now a psychology professor at the University of New Mexico, in Albuquerque, said in a statement.

Lesions to the MFC in humans and other animals are known to cause impaired performance in tasks that require learning from mistakes, such as a false start in a race. But the mechanism for how MFC achieved this control wasn't known.

Cavanagh and his colleagues at Brown and Yale Universities measured the brainwaves of rats and humans as both performed a task that involved estimating time in response to a cue.

The researchers saw an increase in low-frequency brainwaves in the MFC of rats and humans after they made errors during the task. The brain activity in this area was synchronized with activity in the motor cortex, the part of the brain that controls muscle movement.

When the scientists used drugs to inactivate the MFC in the rats, the animals were worse at learning from their mistakes on the task, and their MFC brainwaves were less in sync with the motor cortex.

The results, detailed today (Oct. 20) in the journal Nature Neuroscience, "describe a new mechanism for behavioral adaptation through low-frequency oscillations," the authors write. The findings suggest rodents could be a good model for testing new drugs or brain stimulation treatments for diseases involving problems with adaptive control, they add.