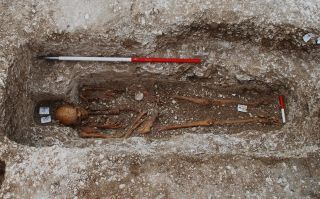 A strain of leprosy, found in this skeleton of a medieval pilgrim at a UK burial site, has been genotyped.
(Image: © Roffey, S. and colleagues, PLOS Neglected Tropical Diseases)

A young man who made a religious pilgrimage in England sometime during the late 11th or early 12th century ultimately died of leprosy and was buried in a hospital cemetery. Now, scientists studying his remains have found, at least in his death, he was not treated as an outcast but was given a traditional pilgrim burial.

"The wider implication of our research, ultimately, is that it can help challenge long-held and false notions of leprosy sufferers being traditionally outcast," lead researcher Simon Roffey, a lecturer in archaeology the University of Winchester in the United Kingdom, told Live Science. The excavated man received a pilgrim's burial – meaning he was interred with a scallop shell, a symbol of a pilgrim who has made the journey to the shrine of St. James in Spain.

The burial challenges modern misconceptions that leprosy sufferers were outcast and the disease was linked to sinfulness, Roffey said. [6 Strange Facts About Leprosy]

Leprosy is a bacterial disease that causes severe, disfiguring skin lesions and nerve damage, according to the Centers for Disease Control and Prevention (CDC). The disease is not all that contagious; a person needs repeated contact with nose or mouth fluids from an infected person to contract leprosy, the CDC said. However, many people feared the condition in the past, seeing it as an incurable, contagious threat, the CDC said.

Leprosy dates back almost 4,000 years, and other studies suggest that the genome of the bacteria that cause it, Mycobacterium leprae, has not changed significantly in that time, the researchers said in the new study. This might explain the decline in the incidence of leprosy since its peak in the medieval period, as people gradually adapted to the disease, the researchers added.

To learn more about leprosy's genetic history, Roffey and his colleagues examined the pilgrim's skeleton. The man had been buried in the cemetery of the leprosy hospital St. Mary Magdalen, Winchester.

The scientists said they found that the man, who was between 18 and 25 years old when he died, lived during a time when religious pilgrimages were at their height in Europe. He likely didn't live in Winchester, and may have traveled because he wanted to die there, they said.

The pilgrim's skeleton showed minimal signs of leprosy, with the lesions mostly confined to the bones of his legs. However, he likely suffered from multiple tumors in his tissues caused by inflammation and infection, the study researchers said. The man might have also suffered from facial paralysis as a result of nerve damage associated with the disease, they said.

The majority of strains of leprosy found in remains in the cemetery at St. Mary Magdalen were from a genetic strain called 31. However, the particular strain found in the pilgrim's remains belonged to what's called the 2F lineage, a type of leprosy associated today with cases from south-central and western Asia.

Though other excavated remains at the site also contained 2F M. leprae strains, the strain from this pilgrim was genetically distinct from others at this site, the scientists said. [27 Devastating Infectious Diseases]

"This would suggest that the individual was quite widely traveled and came into contact with a diverse range of ethnic groups," Roffey said.

The man's travels may have included trips to Spain, the scallop shell that he was buried with suggests.

The presence of two different leprosy strain types, 31 and 2F, in the cemetery may indicate that the disease was introduced at multiple times into southern Britain by the movement of pilgrims and settlers, the researchers wrote in their study.

The site is also one of earliest excavated examples of leprosy from Western Europe, with about 86 percent of the burials there showing skeletal signs of leprosy.

The study was published today (Jan. 26) in the journal PLOS Neglected Tropical Diseases.