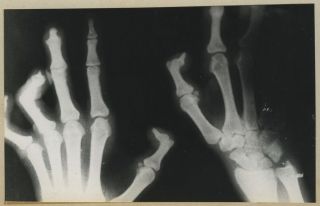 This x-ray of the hands of someone with leprosy was taken in Thailand. The disease causes deformities and contractures, seen here.
(Image: © National Museum of Health and Medicine/Contributed by Major Buker O.S.G. [Office of the Surgeon General] )

Leprosy has been confirmed in one of two California schoolchildren suspected to have the disease, according to CBS Los Angeles.

Although two children were initially suspected to have the disease, there is no indication that the second child contracted the illness, Riverside County Public Health Officer Dr. Cameron Kaiser said in a statement. [Top 10 Stigmatized Health Disorders]

Leprosy can be definitively diagnosed only by taking a skin biopsy and looking for the bacteria that cause the condition, according to the Centers for Disease Control and Prevention (CDC). Other tests, such as blood tests, are not sensitive enough to the detect the disease, so they are not used in the United States, the CDC said.

Leprosy affects mainly the skin, peripheral nerves, upper respiratory tract, eyes and lining of the nose, according to the National Institutes of Health.

A key sign of the disease is the presence of skin lesions, the NHDP said. These lesions may be raised, flat, light or pigmented, according to the NHDP. Because leprosy affects the nerves, a person may also lose sensation in the lesion, meaning he or she would not feel it if someone touched the area.

To diagnose someone with leprosy, doctors need to take a small sample of the skin from one of these lesions, the NHDP said. The biopsy should be taken from the most active lesion on the patient and should include some of the fat beneath the skin, the NHDP said. The sample does not need to bigger than 4 millimeters (0.16 inches) in diameter.

The skin sample is then examined in a lab to determine if it contains Mycobacteria. Leprosy is caused by a species of Mycobacterium called Mycobacterium leprae. In the United States, the NHDP conducts these tests.

Once diagnosed, leprosy is easily treated with antibiotics, the CDC said. However, the treatment does take a long time: A person with leprosy will have to take antibiotics for six months to two years, the CDC said.