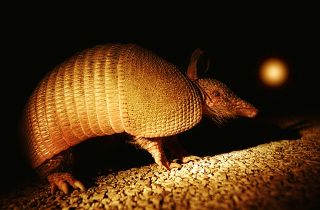 Armadillos not only carry leprosy, they can transmit it to humans, a new study finds -- though cross-species leprosy transmission is rare.
(Image: © Heidi and Hans-Jürgen Koch/heidihanskoch.com)

Sometime within the last 500 years, European explorers transmitted leprosy to armadillos in the New World. Now, a new study finds that the disease is capable of jumping back from armadillos to humans.

In 25 Americans with leprosy who lived in areas where armadillos roam, the disease matched a unique strain of leprosy-causing bacteria also found in 28 out of 33 wild armadillos, researchers reported today (April 27) in the New England Journal of Medicine.

Cross-species transmission is rare, and with only 150 cases of leprosy a year in the United States, there is little reason for concern, study author Pushpendra Singh of Ecole Polytechnique Fédérale de Lausanne in Switzerland told LiveScience. Still, Singh said, contact with wild armadillos should be avoided.

"People hunt them, eat them, make souvenirs out of their shell," Singh said. "Eating or handling raw or improperly cooked meat should be avoided, as it may have enormous number of bacteria if that armadillo had leprosy."

Beside humans, armadillos are the only animals known to get leprosy, also known as Hansen's disease. Leprosy is caused by a bacteria, Mycobaterium leprae. The disease causes skin lesions and nerve damage, but it's best known for the stigma carried by sufferers. In the late 1800s, one island in Hawaii, Molokai, was set aside to quarantine leprosy patients because of fears that the disease would spread.

In fact, Singh said, leprosy is not very contagious at all: More than 90 percent of people who come in contact with the bacteria will fight off the infection without symptoms and without becoming contagious. Antibiotics are very successful in treating the disease.

Worldwide, there are about 250,000 new cases of leprosy each year, but according to the U.S. Department of Health and Human Services, only 150 of those occur in the United States. Of those 150, at least 100 are explained by human-to-human contact, in which a traveler contracts leprosy in a country where it is more prevalent, such as India or Brazil.

But about 50 or so U.S. cases are in people who say they haven't traveled abroad and haven't been in contact with another person with leprosy. Previous case studies have suggested that in at least three cases, the disease came from armadillos, which range across the Southeastern United States, from South Carolina to Texas.

To track the origin of these patients' leprosy, Singh and his colleagues took M. leprae samples from 50 U.S. outpatients seen at a clinic in Louisiana and from 33 wild armadillos caught in the southern U.S. For comparison, they also used samples from foreign patients who would have contracted the disease through contact with another person.

The researchers analyzed the genome of the bacteria and found that 25 of 39 patients who lived in areas with armadillos had a strain of leprosy that matched one found in 28 of the wild armadillos. The strain has never been reported anywhere else in the world, the researchers wrote.

In 15 cases, the researchers had data on whether the patients reported touching or eating armadillos. They found that eight people had interacted with the animals, including one person who frequently hunted and ate armadillo.

The results "strongly implicate" armadillos in at least some human leprosy cases, Singh and his colleagues wrote. Nonetheless, leprosy is rare and there is no reason to panic, Singh said. Long-term contact with armadillos and consumption of armadillo meat should be avoided, he said, and doctors should be aware that leprosy can sometimes occur in patients who haven't traveled abroad.

Because leprosy is so rare, diagnosis can sometimes be the hardest part of treating the disease. Jose Ramirez, a former migrant worker from Houston who contracted leprosy after hunting and eating armadillo, struggled with symptoms for five years before being diagnosed. Antibiotics cured Ramirez, who said in a statement that the study should put to rest stigma about the disease.

"We need to take this opportunity to give leprosy patients a voice and to learn to not use the word 'leper' that has negative connotations around the world, a stigma that should be replaced with an understanding of the disease and its causes," Ramirez said.