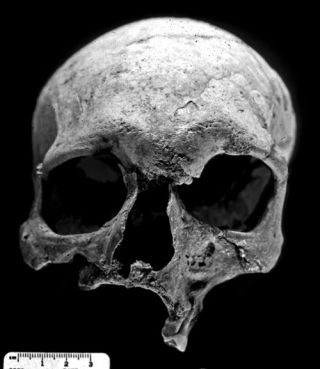 The skull of the 4,000-year-old leper skeleton found buried in Rajasthan, India. The skeleton was interred within a large stone enclosure that had been filled with vitrified ash, considered purifying in Vedic tradition.
(Image: © Gwen Robbins)

The finding, detailed in the May 27 issue of the online journal PLoS ONE, is also the first evidence for the disease in prehistoric India and sheds light on how the disease might have been spread in early human history.

Though it is no longer a significant public health threat in most parts of the world, leprosy is still one of the least understood infectious diseases, in part because the bacteria that causes it (Mycobacterium leprae) is difficult to culture for research and has only one other animal host, the nine banded armadillo.

Leprosy, aka Hansen's disease, is characterized by skin lesions. It does not cause one's limbs to fall off. And it is not very contagious. It is transmitted through prolonged close contact with droplets from the nose and mouth of those already infected.

While leprosy is curable now, there was no treatment for the disease for most of human history and lepers were often ostracized by their communities.

Studies of the bacteria's genes, detailed in a 2005 issue of the journal Science, have suggested two possible origins of the disease: One posits the disease may have originated in Africa during the Late Pleistocene and later spread out of Africa sometime after 40,000 years ago, when human population densities were small; the other suggests a Late Holocene migration of the disease out of India after the development of large urban centers

Historical sources support an initial spread of the disease from Asia to Europe with Alexander the Great's army after 400 B.C. The earliest written reference to the disease is thought to be in the Atharva Veda, a sacred Hindu text composed before the first millennium B.C. The text is a set of Sanskrit hymns devoted to describing health problems, their causes and treatments available in ancient India.

But skeletal evidence for the disease was previously limited to the time period of 300 to 400 B.C. in Egypt and Thailand.

The newly-discovered skeleton was buried around 2000 B.C. in Rajasthan, India, at the site of Balathal. From 3700 to 1800 B.C., Balathal was a large agrarian settlement at the margins of the Indus (or Harappan) Civilization.

Burial is uncommon in the Hindu tradition unless the person is highly respected or unfit to be cremated, a category that included outcasts, pregnant women, children under 5, victims of magic or curses, and lepers. The leper's skeleton was interred within a large stone enclosure that had been filled with vitrified ash from burned cow dung, the most sacred and purifying of substances in Vedic tradition.

The latter half of the third millennium B.C. was a period of social complexity in this civilization, characterized by urbanization, a system of writing, standardized weights and measures, monumental architecture, and trade networks that stretched to Mesopotamia and beyond.

The presence of leprosy in India toward the end of this period indicates that M. leprae existed in South Asia at least 4000 years ago, which lends support to the idea that the disease migrated between Africa and Asia during a period of urbanization, increasing population density, and regular inter-continental trade networks.

Gwen Robbins, of Appalachian State University and one of the team members that studied the skeleton, is currently trying to extract ancient DNA from the skeleton to determine if the strain of M. leprae infecting the individual from Balathal is similar to strains common in Africa, Asia and Europe today. Any DNA evidence would help further clarify the paths the disease traveled around the world.

The research was funded by the American Institute of Indian Studies, the George Franklin Dales Foundation, Fulbright, and the University of Oregon Graduate School.